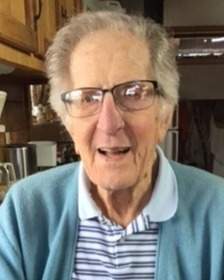 Al Vernon, 95, passed away peacefully with family at his side at Seaside Hospital on Monday, September 5th, 2022.  A resident of both Gearhart and Seaside for a combined 42 years, Al will be missed by the community who enjoyed his friendship and calm leadership.

Al was born on his parent’s farm in Vancouver, Washington July 10th, 1927.  Washington State University was where he met the love of his life, Carol Marcy, they were married for 64 years.  Al served in the US Army and was stationed at White Sands Missile Base, where he was a part of our nation’s early space and missile program.  Al returned home to the northwest and went to work for First National Bank in Portland, Oregon.  In 1981, wishing to be a part of a coastal town, Al took over as Branch Manager of the Seaside First Interstate Bank.

One of Al’s passions has always been Community Service, and he was involved in many volunteer activities to benefit the North Coast area.  Al served in the Seaside Chamber of Commerce, was involved with Seaside Rotary, was a City Councilman in Gearhart, served on the board for Providence Seaside Hospital, and coached a team of distance runners through his involvement with the Special Olympics.  In 1985, Al also helped form the North Coast Land Conservancy in Clatsop County, which has since grown to protect many thousands of acres on 33 different sites.

Al stayed active up until the end of his life, and many people in Seaside and Gearhart will remember his smiling face as he walked or jogged in the area.  Al took up jogging in the early 80’s, and ultimately ended up running the Seaside Marathon, multiple Astoria Bridge Crossing races, and participated on various teams that allowed him to run the Hood to Coast Relay race 14 times – the last time when Al was 75.

Those wishing to make a memorial contribution in Al’s memory are asked to consider a gift to the North Coast Land Conservancy (nclctrust.org) or the Providence Seaside Hospital Foundation (foundation.providence.org/oregon/seaside/home).