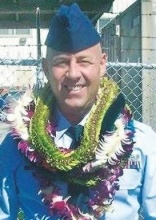 Chief Master Sgt. Alan T. Bergeson passed away peacefully at the age of 52 on Feb. 19, 2016, in his home at Kailua, Hawaii. Alan was born on June 28, 1963, in Astoria, Oregon, to Larry and Marianne Bergeson. Alan graduated from Seaside High School in 1982, and enlisted in the Air Force in 1983, and retired from the Air Force in 2013, after 30 years of service. He achieved the rank of chief master sergeant. After retiring from the Air Force, Alan went into property management, and had just recently received his Realtor's license. Alan enjoyed spending time with his family, friends and his three dogs (Buddy, Goma and Mochi), hiking, working out, traveling, playing in the surf, laying in the sun and his job of property management. Alan was known as a great mentor of youth, and for his great personality, kindness and compassion for all. Alan will be dearly missed by all who were fortunate to have known him. Alan loved his best friend, Jennifer Braun of Cannon Beach, and numerous friends in Hawaii. Alan enjoyed life to the fullest. Alan is survived by his father, Larry Bergeson of Seaside; his brother, Mark Bergeson and his wife, Suzette, and their three children, Dani, Andrew and Matt, of Astoria; his brother, Russ Bergeson and his daughter, Maddie, of Bend; his sister, Paula Mespelt and her husband, Don, and their two children, Ashley and Josh, of Seaside, and his great-niece, Lexi, of Salem; as well as numerous aunts, uncles and cousins. Alan was preceded in death by his mother, Marianne Bergeson. A celebration of life will be held on Saturday, April 2, 2016, from 1 to 4 p.m., at the Surfsand Resort in Cannon Beach, 148 W. Gower St. The family asks in lieu of flowers that you make a donation to the Lower Columbia Hospice in Astoria, Oregon, in his mother's name: Marianne Bergeson.
To order memorial trees or send flowers to the family in memory of Alan Todd Bergeson, please visit our flower store.