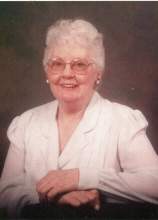 Ancil Jean Golden Reed age 93, passed away in Seaside on August 30, 2017. Jean was born November 24, 1923 in Boise, Idaho to Harold and LaRu Smoot Golden. She was the oldest of four children. Jean was raised in the small town of Bruneau, Idaho. She graduated from Bruneau High School in 1941, then attended Boise Junior College, majoring in Music. After the outbreak of World War II, later that year, Jean went to Seattle to work for Boeing Aircraft. Her first assignment was repairing machine-gun holes in war planes and later she worked on the assembly line for building fighter aircraft wings. It was at Boeing where she met her first husband Kenneth A. Johnson. Jean was an extraordinary musician. She had an interest in progressive piano jazz, but was well known for learning popular songs by ear and playing requests for songs old and new, familiar and obscure. She played in nightclubs and on radio stations in Idaho in the 1950's and 60's, and at one point had her own radio show. Later came other marriages and children and she worked long hours to support her family. She was a faithful member of the Church of Jesus Christ of Latter-Day Saints and had a lifelong interest in genealogy, arts, crafts, and music. She loved all animals especially her beloved pets that were an important part of her life. As part of her love for music, she loved listening to Tony Bennett and had the opportunity to see him twice in concert. Jean had a sense of humor and an ornery side too! She loved to make people smile. Jean always remained near her two youngest daughters who made sure that her needs were met. It was always important to her that all of her children stay in touch with each other even though most of them lived far apart. During the last couple years of her life, she developed a close relationship with the staff and caregivers at Neawanna by the Sea. Jean is survived by her children, Linda Salsbery and Lane Johnson of Burns; William Reed of Portland; Kerry Banks of Mesquite, Nevada; Kathy Foley of Goldendale, Washington; Bruce Bandel of Coer d'Alene, Idaho; Kellie Zanni of Warrenton Oregon; and Shelly Poole of Astoria, Oregon. Also 22 grandchildren, 50 great-grandchildren and five great-great grandchildren. Jean was preceded in death by her parents and brothers, Max and Jim Golden, and her sister Nedra Golden Kirkland; a son, Lance Dean Hyatt; and grandsons, Michael Lave Johnson and John Wesley Hyatt. Jean's passing was quick and peaceful. She was our "Treasure". So special to us and loved by all. We miss her deeply. Her final resting place will be at the Burns Cemetery near her parents with which there will be a graveside service on Monday, September 11, 2017 at 10:00 AM. Matthew 6:19-12 "Lay not up for yourselves treasures upon Earth, where moth and rust doth corrupt, and where thieves break through and steal: But lay up for yourselves treasures in Heaven, where neither moth nor rust doth corrupt, and where thieves do not break through nor steal: For where your Treasure is, there will your heart be also."

The Church of Jesus Christ of the Latter-day Saints

The Church of Jesus Christ of the Latter-day Saints