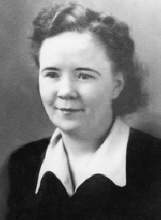 Anna R. "Ann" Marchbank, 88, of Astoria, died Wednesday, Sept. 26, 2012, in Astoria.
She was born Oct. 14, 1923, in Valier, Mont., to George and Elma De Etta (Kennett) Jorgensen.
She served in the U.S. Army Air Force from 1944 to 1946 as an automotive equipment operator. She received the American Campaign Medal, Good Conduct Medal and the World War II Victory Medal.
On April 20, 1963, she married Charles Marchbank in Skamania County, Wash. He preceded her in death.
Mrs. Marchbank was a bartender at the American Legion for 20 years, and a waitress. She retired in 1992.
She was a member of the American Legion for 65 years.
Family members said she enjoyed traveling and visiting family.
She is survived by a sister, Bonnie Cain of Astoria; four nieces, Pamela Cain and Cindy Gebhardt and her husband, Paul, all of Astoria, Linda Kitchens of Oklahoma City, Okla., and Patsy Garza and her husband, James, of Brownsville, Texas; four nephews, Randall Cain of Astoria, Tom Cain of Warrenton, Hank Weigel and his wife, Darlene, of Carlton and Kenny Weigel of Nehalem; and several great-nephews and great-nieces.
No service will be held.
Private interment will be at Willamette National Cemetery in Portland.
Memorial contributions may be made to Clatsop Post 12 American Legion, 1132 Exchange St., Astoria, OR 97103 or the American Legion, 1305 Tucker Road, Hood River, OR 97031.
To order memorial trees or send flowers to the family in memory of Anna R. Marchbank, please visit our flower store.