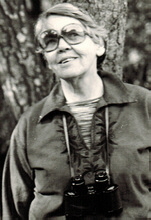 Ardath Marguerite Oechsli, 89, passed away Tuesday, February 05, 2013 at Clatsop Care Center in Astoria.
She was born September 05, 1923 in Alhambra, California to Vernon and Lael (Burkhead) Brown. She attended Alhambra schools and in December, 1942 married Raymond Oechsli in Berkeley, California. He preceded her in death.
Ardath lived in Astoria for nearly a decade. While making California her home she was primarily a homemaker, but also served as church secretary and bookkeeper.
She was a dedicated civil rights activist who loved to study nature, history, religion, philosophy and politics. She was an avid bird watcher.
Ardath is survived by a brother, David Brown of Berkeley, CA; Grandsons, Aaron Oechsli and David Oechsli of Redding, CA; Michael Oechsli and Andrew Ryan of San Jose, CA; Granddaughters, Elaina Manzanares-Oechsli of Navoto, CA, Selene Nichols of Redding, CA and Angelique Hemphers of Eureka, CA. Also nine great-grandchildren, two nephews and one niece.
In addition to her parents and husband, Ardath was preceded in death by a daughter, Sara Campbell and a son, David Oechsli.
Her family is planning a private memorial at a later date.
Ardath requested that contributions be made to the Clatsop County Food Bank.
To order memorial trees or send flowers to the family in memory of Ardath M Oechsli, please visit our flower store.