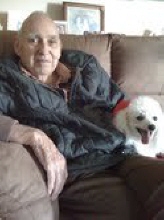 Arthur 'Art' Faust was born in Albuquerque N.M October 21, 1923. He spent his childhood in the midwest. At 17 years old he joined the U.S. Navy during WWII and he served his country for 20 years.
During his service he met and married Ruby Hayes in December 1945. They were blessed with 3 beautiful children. The family lived in Clatsop county for many years and loved the area and the people. They were very active in square dancing with the Astoria Hayshakers, the Astoria Grange and the Seaside American Legion.
In later years they moved to Portland to be closer to the kids. Art spent his last couple of years residing in Vancouver. He loved spending time with the family. Art is preceded in death by his wife Ruby, son Gene, brother Jerry, sister Mary, aunt Ada and pet companions Rita #1,2,3,4 and 5. He is survived by his son Jim (Jan) Faust and daughter Judith Harper. Grandsons: Jeff (Lisa), Joel (Eileen), Jason, John (Angela), Michael, Nathan (Ali). Great Grandchildren: Blaise, Zackary, Bailey and Mathew Faust also Amberlyn, Austin and Jayden Harper. A memorial service to celebrate his life will be held Friday April 26, 2013 at 10 am. The location is at the Hughes-Ransom Mortuary, 576 12th St. in Astoria. Graveside services will follow at Ocean View Cemetery. In lieu of flowers, family asks that contributions be made in Arthur's name.
To order memorial trees or send flowers to the family in memory of Arthur Albert Faust, please visit our flower store.