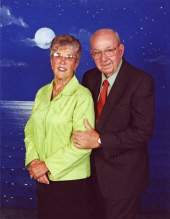 Arthur Grafton, Jr., age 87, passed away peacefully at home on July 24, 2017 in Seaside, Oregon. He was born on June 25, 1930 in Seaside, Oregon to Arthur and Esther (Swanson) Grafton. He was a lifelong resident of Seaside and graduated from Seaside High School in 1948. Art served in the Army then returned home where he met Barbara who had moved from South Dakota to be a nurse in Oregon. He married Barbara Jean Dollenbacher on August 21, 1955, in Cavour, South Dakota. Art was a devoted husband and father of four children. He liked fishing and clam digging and watching WWE (wrestling). He worked for the US Postal Service for 30 years until he retired in 1992. After retiring he traveled to places near and far, with the travel trailer, on cruises, and to various destinations in Europe, always with Barbara at his side and usually with his sister Carol and her husband Lloyd. The adventures were always fun and memorable, but he also looked forward to getting back home to the rest of his family. Taking the grandkids camping, hiding Easter eggs, making them waffles for breakfast, creating his famous potato salad, and imparting words of wisdom like "always dry between your toes", made him without a doubt the best Papa in the world. He will be remembered for his calm, quiet demeanor and unquestionable love for his family. He is survived by his wife Barbara; three children: daughter and son-in-law Tina and Ted Ames of Warrenton, Oregon; daughter Jenny McCollister of Seaside, Oregon; son and daughter-in-law Tim and Elizabeth Grafton of Portland, Oregon; daughter-in-law Sandy Grafton of Bend, Oregon; eight grandchildren: Kari Ames; Kevin Ames and wife Loren; Aimee Stanton and husband Kyle; Kelley Ames and wife Jilian; Christopher McCollister and fiance Jennifer Kaplan; Sarah Azril and husband Adam; Samantha Grafton and fianc Mack Hagen; Briauna Grafton and partner Joshua Yeomans; five great grandchildren: Amara, Eva, Grayson, Carson, Wednesday. He is also survived by his brother Robert Grafton of Gresham, Oregon, his sister Carol Cady of Salem, Oregon, and numerous nieces and nephews. He was preceded in death by his son, Jeffrey Grafton. A memorial service will be held on Saturday, August 5, at 1:00 PM, at Hughes Ransom Mortuary, 220 N Holladay, Seaside, Oregon. A reception will follow at 1000 N. Holladay, Seaside, Oregon. Memorial donations may be made to Shriners Hospital in Portland, Oregon.