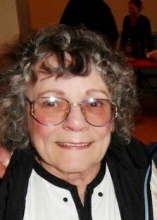 Barbara passed away September 10, 2015. She was born March 1, 1938 to James and Agnes Neville in Lincoln Nebraska; she was raised and educated there along with her sisters Jean (Dustin), Lynn (Berg), and Jackie (Vontz). Barbara met and married Al Peterson and had 4 children David; Patricia; Dahl and James. In 1964 they moved to Oregon were Barbara was a homemaker, caregiver, and her favorite "A school bus driver" where she was known as Mom, or Mrs. P. by all her "Kids". She will be remembered by her smile, humor, laughter, and her love for her family. She is survived by her 4 children, David, Patricia, Dahl, James, 10 grandchildren, Rachel, Justin, Stephanie, Kira, Megan, Sean, Chris, Ian, Daniel, Marissa, 11 Great-grandchildren, she is proceeded in death by her husband Al, and Sister Jean. A Memorial Service for Barbara and Al will be held Sunday, September 27, at 1:00 P.M. at Hughes-Ransom Mortuary & Crematory in Astoria.
To order memorial trees or send flowers to the family in memory of Barbara Peterson, please visit our flower store.