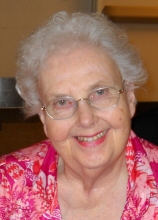 Betty Lou (Christensen) Mosar July 26, 1927 December 6, 2014 Betty Lou Mosar passed away in the early morning hours on December 6, 2014 with her loving family at her bedside. She was 87 years old. Betty was born July 26, 1927 in Vancouver, WA to Lloyd and Tekla Christensen. She grew up on the Oregon coast, first living in Coquille, then Astoria, and finally in Seaside, Oregon where she spent most of her life. Betty attended Central Grade School and Seaside High School (class of 1944), and through the years, kept in touch with many of her high school classmates through multiple class reunions. Betty attended Oregon State University (then Oregon State College) from 1944-48, where she pledged the Alpha Chi Omega sorority. Her sorority sisters became life-long friends and always held a special place in her heart. She began dating Robert "Bob" Mosar (Phi Gamma Delta fraternity), also originally from Seaside, while they were at OSC. Betty graduated with a Bachelor of Science degree in Education. She and Bob were married shortly after, on June 12, 1948, and spent most of their 64 years together at their beloved "Frog Hollow Farm" home north of Seaside. Betty began her high school teaching career after her three children were in elementary school. "Mrs. Mosar" taught algebra, geometry and trigonometry classes at Warrenton High School for over 20 years, retiring in 1986. She was an active member of many professional organizations during her lifetime, including the American Association of University Women (state President, 1969-71; Treasurer, 1965); Delta Kappa Gamma, professional honorary Society (where she held several local and state offices); and her beloved PEO International Sisterhood, where she was a long time member of Chapter CR, serving as president from 1991-1992. She and Bob were also members of the Seaside United Methodist Church. Betty enjoyed many summer vacations with her family, driving to destinations around the United States and Canada. She traveled within the U.S. and abroad with Bob, to destinations in Hawaii, New Zealand, Australia, and the Cook Islands. She loved spending time with her family and friends, particularly during the holidays and for birthday celebrations. She is survived by her son, Jim Mosar (Barbara); daughter, Janice Smiley (Bill); daughter, Marcia Beck (Jim); sister Phyllis Edy Grey, (Jack); sister-in-law, Sally Gidley; six grandchildren, Mike Mosar, Jeff Mosar, Katrina Beck Hagen, Melanie Broome, Megan Beck Norcross, and Jason Broome; and many nieces, nephews, and cousins. She was preceded in death by her husband, Bob, and sister, Jacquelyn Gallemore. A memorial service will be held at 12:00 noon on Thursday, December 18, at Hughes-Ransom Mortuary in Seaside. A graveside service will follow the memorial at Ocean View Cemetery, Warrenton, OR. Viewing will be on Wednesday, December 17 from 12:00-6:00 pm at Hughes-Ransom. In lieu of flowers, memorial contributions may be made to Seaside PEO Chapter CR, c/o Janet Murray, 461 Woodland Avenue, Gearhart, OR 97138. Hughes-Ransom Mortuary in Seaside is in charge of arrangements.