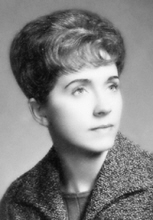 Beverly (Bev) Ann Evans, 74, passed away on June 15, 2013, in Knappa, Oregon.
Bev was born on March 13, 1939, to Arthur Lawrence Poulter and Virginia (Williams) Poulter in Twin Falls, Idaho, where she grew up. Bevs parents were in the restaurant business, and she learned the tricks of the trade while growing up by waiting tables for her parents in their restaurant. She followed their example and remained in the restaurant business during early adulthood. As her oldest daughter, one of my earliest memories are of me sitting at a booth in the family restaurant, eating my favorite thing then, mashed potatoes with brown gravy.
She met the love of her life, Donald (Don) Evans, and married him in 1968. She brought her 3 little girls and Don brought his 3 boys into the marriage for a ready-made family. They both loved camping and boating and spent many years, with their children, doing it often on the beautiful lakes of Wyoming. Fried trout and venison were staples for the Evans family during those years, and memories of cliff diving and ghost stories told around the campfire will be fondly remembered by all of 6 of her children.
A year after Dons passing in 1997, she moved from her Wyoming home to the beautiful Oregon coast with her daughter, Joleen. She loved the beauty of the area, and has left a legacy of her love for the Oregon coast to her grandchildren, some of whom have visited each summer for many years, and some who have moved to the area themselves.
Beverly is survived by her daughters, Valla (Kevin) LaBoa, Joleen Wambolt, and Deanne (Jon) Hinton, and her stepsons, Gary (Cindy) Evans, Randall (Robin) Evans, and Todd (JoAnne) Evans, 9 grandchildren, her sister Shirlee (James) Shidler, and many other family members.
She was preceded in death by her husband, Donald Lloyd Evans, and her parents, Arthur and Virginia Poulter.
A memorial service will be held on Friday, June 21, at 11:30 a.m. at the Astoria Ward Meeting House, 350 Niagara Avenue, Astoria, OR 97103.
Contributions and remembrances may be made to the "Remembering Beverly" fund online at www.youcaring.com/beverly
To order memorial trees or send flowers to the family in memory of Beverly Ann Evans, please visit our flower store.