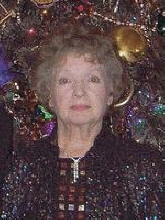 Billie passed away peacefully in her home following a prolonged illness, with her husband of 66 years, Bob, at her side.
She was born in Portland, OR to Captain Henderson Birch Davis and Bonnie June Royce Davis. She had two sisters, Betty June Haskett and Jacqualine DeRoo, the latter who preceded Billie in death. She married Bob on December 10, 1946, They had three children. Glenn and Pamela June preceeded her in death. William Robert Jr. survives. She was especially proud of her grandchildren.
Born with a heart problem, as a child she enjoyed roller skating at The Oaks. Her father was captain of the sternwheeler Portland which was on the Willamette. At age twelve she helped cook on the sternwheeler baking cookies, pies and cakes for the passengers. Billie bragged about her heritage. She could trace her lineage back to 1000AD in England.
Billie attended Portland State University, Marylhurst, Mt. Hood and Clatsop Community Colleges. She and Bob opened a grocery store in Portland which they ran for 30 years before retiring to Seaside. She was an activist and involved in many philanthropic causes, raising money for the first life flight helicopter for Emanuel Hospital along with raising money for battered women and the homeless.
She was president of the Womens Republican Club and the highlight of her tenure was a hand written note from President Ronald Regan inviting her to tea with Nancy at the White House. Billie took her mom to the first inauguration and Bob attended when she was invited for the second term.
Billie was a very accomplished artist (which she inherited from her mother who taught oil painting) and worked and taught in many mediums including oil, watercolor, ceramics as well as an accomplished seamstress.
She was a member of Our Saviours Lutheran Church, Souwester Garden Club, Trails End Art Association and Oregon Society of Artists.
A Celebration of Life will be held at noon on Friday, April 26 at Our Saviours Lutheran Church, 320 1st Avenue in Seaside. In lieu of flowers, donations can be made to OSLC Memorial Fund.
To order memorial trees or send flowers to the family in memory of Billie D. Graber, please visit our flower store.