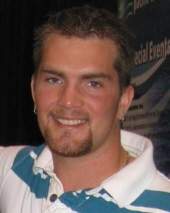 Blake C Painter was born in Astoria, Oregon on October 20, 1979 to Jeffrey and Marion (Ericksen) Painter. He left us far too soon on May 21, 2018 at the age of 38. A 1998 graduate of Astoria High School Blake was active in sports both in and out of school. Besides football and baseball, he raced motocross and participated in martial arts. By the age of 12 he had earned a junior black belt and at 16 he became a full first degree Black Belt in Tae-Kwon-Do. He traveled the northwest engaging in exhibitions and winning most of the tournaments he entered. Blake was an avid outdoor enthusiast from a very early age, from hunting big game and waterfowl to digging razor clams, snow skiing to water sports, you name it he did it. And he did it well. He took his love of the outdoors to a professional level when he began commercial fishing with his father aboard the F/V Western Skies while a freshman in high school. He traveled to Alaska after halibut and locally for Dungeness crab. Along the way he worked aboard and skippered other vessels for King and Snow crab in the Bering Sea. He captained the F/V Evening Star during some of her most stellar catches and was awarded the DHS/USCG Public Service Commendation for his part in the Empress of the North. At that time, it was the largest at sea rescue ever accomplished in Alaska state history and the second highest award given. Meeting him with his ready smile and bright blue eyes you never forgot him. And he did not forget you. He is survived by his precious daughters Hadley, 9 and Khloe 7, his parents, brother Kalen, beloved aunt Marcia Nichols and cousin Theresa Smith, all of the Astoria area. There are so many dear friends and loved ones that it is impossible to name you all. He knows who you are and so do we. A private graveside service was held earlier followed by interment at Greenwood Cemetery. The family encourages making donations in Blakes name to the charity of your choice. Funeral service arrangements in the care of Hughes-Ransom Mortuaries & Crematory, Astoria. Visit the online memorial tribute where you can sign the guestbook, share a favorite memory, or upload media (photos and/or video) at www.hughes-ransom.com and www.facebook.com/hughesransommortuary/