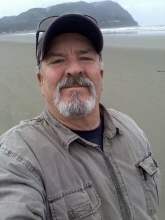 Bryce G. Coshow, age 59 of Astoria, Oregon, entered into God's eternal care on Friday, December 27th. He was born April 6th, 1954 in North Kingstown, Rhode Island and after much traveling, graduated from Estancia High School in Costa Mesa, California. He called Orange County, California home for many years after that. In his younger years, aside from being a well-known knee-boarder in Newport Beach, he played on the high school football team with his brother Scott, and really loved golfing. He went to work with his dad, Harlan Williams before starting Dig-It Landscaping. Eventually he re-joined Harlan at Williams Tires for the majority of his career. After losing Harlan, Bryce began his own business 2Truck2. Bryce was passionate about was he did and his unparallel love for tires made him a great success. Pops, as his girls called him, was on a mission to feed the masses. Not only did he take pride in feeding his family well, he also fed those less fortunate at Astoria Men's Rescue Mission and Helping Hands in Seaside. Cooking for 2 was never an option. He wanted to share his love with the world. Bryce was confirmed in the Catholic Church on March 31, 2013. Bryce found strength and purpose in his faith and his Christian journey. Bryce is survived by his dear mother Gwen Williams of Thermal, California, and beloved wife Candy Coshow of Astoria, Oregon; along with his children he cherished so much, Haylee Coshow (Beau Bergvin) of Huntington Beach, California, Natalie Coshow, Christy Wild (Ryan) of San Diego, California, and Jeremy Wheeler of Gresham, Oregon; his grandson, Jordan Wheeler; his brothers Kevin Gifford , Ronnie Coshow (Denise) both of Salt Lake City, Utah, and sister Shelly Parrish of Goodyear, Arizona. Preceded in death by his brother Scott Coshow, father Buddy Coshow and his beloved stepfather, Harlan Williams.; he joins them with his Heavenly Father. Funeral Mass Services will be held in his name at Our Lady of Victory in Seaside, Oregon on January 1, 2013 at noon. Immediately following the services friends and family will gather at The Logger in Knappa, Oregon. There will also be a 2nd service at Pacific View Memorial Park in Corona Del Mar, California on January 3rd. Memorial contributions may be made to his parish, Our Lady of Victory (Astoria, OR), Helping Hands (Seaside, OR) and Astoria Men's Rescue Mission (Knappa, OR).