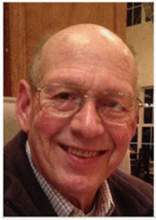 Byron Gunther Pinkney, a resident of Astoria, passed away on Oct. 1, 2016, in Astoria, Oregon. He was 73. He was born July 25, 1943, in Portland, to Byron K. and Phyllis M. Pinkney, and raised in Lake Oswego. Following graduation from Portland State University, Byron managed computer operations at a large company. He left the corporate setting to own his own landscaping company his creativity in designing landscapes was his joy. In retirement, he was in the Coast Guard Auxiliary and volunteered at the Columbia River Maritime Museum. He is survived by his wife of 43 years, Diane Pinkney of Astoria; daughter Andrea Proett of Eugene; granddaughter Erin Proett of Eugene; sisters Maureen Sexton of Albany and Janelle McLeod of West Linn; wonderful nieces and nephews; and many, many friends. All are welcome to join in a celebration of Byron's life on Sunday, Oct. 9, 2016, at 2 p.m. at Hughes-Ransom, 576 12th St. in Astoria. A second celebration is set for Nov. 6, 2016, at 2 p.m. at the Al Kader Shrine Center, 25100 S.W .Parkway Ave, Wilsonville, Oregon. Donations may be made to the Columbia River Maritime Museum, 1792 Marine Drive, Astoria, OR 97103. Thank you for visiting Hughes-Ransom Mortuary & Crematory at hughes-ransom.com to share memories and sign the guest book.