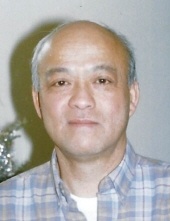 Calvin Maurice Brown, Age 85, Astoria, Oregon On July 26, 2019, Calvin passed away after a long battle with Lewy-Body dementia. Calvin was born in Astoria in 1934. He was the son of Jue-Shee and Kee Wong-Brown. He worked in the canneries as a child. He joined the Air Force and proudly served across Europe during the Korean War. Calvin went on to graduate from Oregon State University in electrical engineering. He worked at Bonneville Power for over 30 years and then retired and moved back to Astoria. His hobbies were numerous. He was a private pilot, enjoyed fishing and hunting but his true passion was spending time with his family and friends. He was very generous and always willing to assist his family and his friends. Coffee, good food and a hyper degree of safety were the three essentials to his everyday life. He was proud of his Chinese heritage and was instrumental in helping design and build a park honoring the Chinese communitys contributions in the Pacific Northwest. The park known as the "Garden of Surging Waves" was opened in Astoria in May of 2014. Calvin is survived by his wife of 45 years, Agnes Brown. His family includes son Craig Brown, daughter-in-law Holly Brown, son Kirk Brown, and daughter Kimi Wong. Surviving siblings include Richard Wong, Fred Brown, Thomas Wong, George Mendoza, Mabel Mendoza and sister-in-laws Deborah Brown and Marilyn Brown. Calvin has 5 grandchildren: Haydn Doggett, Gunnar Doggett, Clifford Brown, Gabrielle Brown and Jordan Brown. Calvin was preceded in death by his mother Jue-Shee Brown-Wong, his father Kee Brown-Wong, brothers Yen Wong, Phillip Brown, sisters Betty Wong, Marcel Wong, and Dorothy Brown. A memorial service is being held on August 9, 2019 at 11:00 A.M at the Hughes-Ransom Mortuary, 576 12th Street; Astoria, Oregon. A special thank you to the staff of Laurel Parc Brightway Memory Care facility.