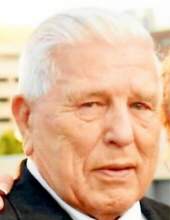 Carl passed away peacefully in his home at Glenwood Village, surrounded by members of his family, on Memorial Day 2020.

He was born in Humboldt, Michigan, on Nov. 14,1923, to Charles and Hulda Kotaniemi. He had four sisters and two brothers, all of whom preceded him in death except his youngest sister.

After becoming the first in his family to graduate from high school, Carl entered the Air Force during World War II, and was later honorably discharged.

After the war, Carl moved to Astoria, where he met Helen Christell Johnson while working at Point Adams Cannery. They were married on Oct. 11, 1947.

Carl is survived by his sister, Helen Johnson of Marquette, Michigan; three sons, Steven of Astoria, Jeffrey of Eugene and Michael of Ilwaco, Washington; and two daughters, Sandra Ogier of Hillsboro and Cynthia Kotaniemi of Portland. Also surviving are 13 grandchildren and 14 great-grandchildren.

A public service will also be held at the grave site at 1 p.m. at Greenwood Cemetery on Oregon Highway 202. Pastor Steve Dornfeld of Peace Lutheran Church will preside at both ceremonies.

Please join us in celebrating Carl's 96 years, 6 months and 11 days as our family's beloved mentor and patriarch.
To order memorial trees or send flowers to the family in memory of Carl Kotaniemi, please visit our flower store.