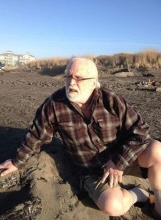 Charles Harbison Wilder was born on September 29, 1939 to Stanley V. and Ann Louise Wilder in Youngstown, OH., he was raised in Niles, OH. A Celebration of will be held at his favorite, local musical venue, the Bridgewater Bistro at 20 Basin Street Astoria, Oregon on Sunday, September 27, 2015 at 3:30 PM. In lieu of flowers and in keeping with Charlie's other passion suggests contributions may be to the Clatsop Community Action 364 9th Street Astoria, Oregon 97103. Charles passed away at his home in Astoria, Oregon on September 17, 2015. "Chuck", to many people and "Charlie" to many more people, was exceptionally intelligent, becoming a Doctor of Social Welfare with a PH.D. from the University of California at Berkley, for a number of years he served as a full professor at Montana State University of Bozeman, Montana. But his real passions were not in teaching. He was a tireless community organizer who dedicated his life to helping the poor and powerless achieve some measure of human dignity. Charles was a superb Jazz Pianist all his adult life, performing all over the Northwest until the last year of his life. With such diverse knowledge, talents, skills and efforts, Charlie touched thousands of lives in ways that simply made the world a far better place. In return, he was loved and will be greatly missed by countless people. Charlie is survived by his wife Jill, daughters Cara Beth Wilder of Bozeman, Mt., Emily Francis Wilder (Frank) of Beaver Creek , OR. Four grandchildren; Ans, Charlie, Simon, and Silas. Charlie is also survived by a brother John S. Wilder of Monte Vista, CO. He was preceded in death by his daughter, Adelaide Wilder.
To order memorial trees or send flowers to the family in memory of Charles Chuck- Charlie Harbison Wilder, please visit our flower store.