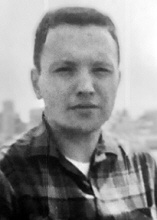 Charles E. Cheuvront was born in Aliquippa PA on April 28, 1930 to John C. Cheuvront and Goldie Kimes. His younger years were spent on the farm with his brothers and Sister Clarence, Sylvia, Don, Ed, Earl, Bill, and John. After selling the farm the family moved to an area of Aliquippa known as "The Bricks". It was during this time that an 11 yr old girl named Bernice came into his life. She was at first an annoyance following him around and telling him she would marry him some day. Charles enlisted in the Navy and was gone from 1947 to 1951. Upon his return Bernice had grown up and they did marry on June 14, 1952. The birth of three children followed. Linda (deceased), Debra and Edward (deceased). After struggling for work in the steel mills and the coal mines Charles moved his family to California in 1961 in search of steady work. In 1963 Charles once again pulled up stakes moving his family to Oregon where he worked at the paper mill Crown Zellerbach retiring in 1992. In 1994 Charles and Bernice moved back east again to Elkins WV. Charles loved the Appalachian Mountains where as a child he had spent much time with his family. In 2016 Charles and Bernice returned to Astoria Oregon to be closer to their family where they have remained until his passing on his 88th birthday, April 28, 2018. Charles is survived by his wife Bernice, his brother Earl his Daughter Debra & Dan Kelley, grandchildren Danielle Chiacco, Valerie & Ned Bitner, Brian Chiacco, Dustin & Sarah Kelly, Jill Kelley and her partner Jason Cerf, Carla Kelly, Jacob & Vicky Cheuvront, Charlie Ann Cheuvront and Corey & Maria Cheuvront, great grandchildren Dominique, Sophia, Gisella, Mikinzie, Marley, Blaine, Gunnar, Russell, Kami, Jacob Jr., Lincoln and numerous nieces and nephews. A viewing/visitation is scheduled for Saturday, May 5th, beginning at 1:00 pm in the Hughes-Ransom Mortuary Chapel, where recitation of the Rosary will start at 6:00 pm, followed by a final opportunity to view & pay final respects until 8:00 pm when the casket will be closed. In keeping with the familys wishes, cremation will take place prior to funeral services scheduled for the following weekend at St Marys Catholic Church in Astoria on Saturday May 12th. The Rosary will begin at 10:30 am followed by the Funeral Mass at 11:00 am. Plans are being made to have services at a later date at the Cemetery in Elkins, WV where Charles will be laid to rest beside his son Edward. The family has requested that memorial contributions be made in Charles' name to either Lower Columbia Hospice or St. Jude Children's Hospital. Information on how to do this or contact information where to send your memorial donation is listed in the detail of the the memorial tribute.