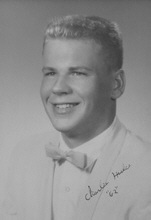 Charles Evan Hulce was born March 4, 1944 in San Francisco, CA to Glenn and Ruth (Riker) Hulce. He was raised in Fresno, CA and graduated from McKinley High School where he was on the football team and was an accomplished shot putter in track and field. He attended Fresno State University majoring in electrical engineering and continued to compete in track and field events.
Charles married and divorced twice, first to Deanna Wall, then in 1982 to Kathleen Sweat.
For many years Charles worked as an electrical engineer at a lumber mill. He was a member of the Church of Latter Day Saints, Astoria Ward. Family members recalled that he loved locating old photographs of his ancestors and tracing his roots.
Charles is survived by a daughter, Alycia Jasmine (Sweat) Hulce of Idaho Falls, ID; a step-son, Jason (Sweat) Will of Vancouver, WA; an aunt and uncle, Lois and Walter Riker of Boone, IA and several cousins. He was preceded in death by his parents, a brother, James Riker Hulce and a step-son, Roman Anthony Sweat.
Graveside services will be held at Greenwood Cemetery Wed, Sep 26, 2012 at 1PM.
To order memorial trees or send flowers to the family in memory of Charles Evan Hulce, please visit our flower store.