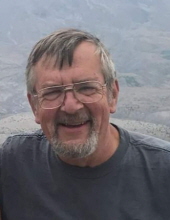 Charles (Chuck) Michael Knapp, age 68 joined his beloved parents and brother with our Lord in Heaven on August 5th 2021. He was born November 15th 1952 to Marion O. Knapp and Violet E. Knapp. He was the middle child of three siblings. He was raised in Knappa, Oregon where he graduated from Knappa High School in 1970. Chuck was hired by Crown Zellerbach, Inc. where he became a millwright and mentor to many. Chuck married the love of his life, Violet Lewis on July 21st 1973.


Chuck will be remembered by friends and family as having a great sense of humor, an avid car enthusiast, and a talented mechanic. He enjoyed all things out doors especially fishing and driving his tractor. He had an open-door policy for helping out anyone with a car or truck issue- Chuck could build, bolt, or weld together any project. He was an integral part of his church community and was always sharing his love of Jesus, be it through a philosophical conversation or a song. Chuck had an amazing voice and was a talented guitar player. He put his family first and was the most loving and wonderful husband, father and grandpa.

Chuck was preceded in death by parents; Marion Knapp, Violet Knapp, and brother; Danny Knapp,
He is survived by his wife Violet M. (Lewis) Knapp, daughters; Tanya Jones, Teresa Martinolich and Jennifer Mack, grandchildren; Joshua and Ella Jones, Alyssa White, Charlie Martinolich, and Ben and Jeff Mack, and his sister Rosemary Barber. Chuck’s warmth and sincere care for others made him the best of friends to many. He will be missed dearly by all who knew him.
Chuck's celebration of life service will be held at 2pm October 24th, 2021 at Clatsop county fair and expo center, 92937 Walluski Loop Astoria, OR
To order memorial trees or send flowers to the family in memory of Charles Knapp, please visit our flower store.