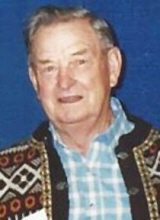 Clarence Osmond Dreyer, Astoria native, 93, died Monday, February 24, 2014 in Astoria. Clarence was born November 7, 1920, in Astoria. He was the second child of Trygve Egenius Dreyer and Johanna Christina (Fremstad) Dreyer, immigrants from Norway. He graduated from Astoria High School. When he was in high school, he had a part-time job setting up pins at the local bowling alley. Clarence married Myrtle Naomi Gustafson, daughter of Swedish immigrants (from the Swedish part of Finland), on July 8, 1943. After 66 years of marriage, she preceded him in death on January 3, 2010. Clarence served in the US Navy from December 7, 1941 to December 31, 1946. For about 3 years he was a skipper on a tugboat in the Admiralty Islands in the South Pacific. Clarence worked at Point Adams Packing Co. in Hammond for 40 years, 1946-1986. In earlier years he was the skipper on the company's boat, Papco. Later he worked as dock foreman. Both Clarence and Myrtle were raised with Scandinavian food, culture and traditions. They kept those traditions alive in their home. Clarence was a life member of Sons of Norway. He also helped with the Scandinavian Midsummer Festival. Clarence enjoyed digging clams, yard work and long Sunday afternoon drives. He took care of maintaining the lawns and other duties at the Sons of Norway lodge in Gearhart for many years. On Sunday mornings he listened to the original long-running Scandinavian Hour request radio program (now off the air). He requested songs to be played for his many local friends or visiting relatives from Scandinavia and listened to songs that were requested in his honor. He did not like to be disturbed during that hour. He did not have an extended family when he was growing up; all his cousins were in Norway. He made his first trip to Scandinavia when he was 53 years old, along with his wife and daughter. He was overwhelmed with the large family he had in Norway; a few uncles and aunts were still living and many, many cousins. That was the beginning of a long friendship with relatives in the "old country." He and Myrtle made a few return trips to Scandinavia, and many of their relatives "over there" visited them in Astoria. The Dreyer home was filled with Scandinavian treasures, many of them gifts from visitors staying in their home. They also liked to speak a combination of Norwegian and Swedish. Clarence loved the water. Whenever Clarence and Myrtle traveled, they always ended up on the waterfront, and Clarence would walk around the docks and look at the boats. Clarence is survived by his daughter, Judie Dreyer of Astoria. His extended family includes two nieces (California and Portland) and six nephews (Astoria, Portland and Oakridge in Oregon, and one in Phoenix). In addition to his wife Myrtle, he was preceded in death by his daughter, Avis Norene Dreyer (age 19) on September 18, 1966, and his sister, Hanna Elfrida Isaacson on January 6, 2014. A funeral service will be held at 1 p.m. on Friday, February 28, at Hughes-Ransom Mortuary. Committal service will be at Ocean View Cemetery. Memorial contributions made be made to Loaves and Fishes (P.O. Box 243, Astoria), Lower Columbia Hospice (2111 Exchange St, Astoria) or a charity of one's choice.