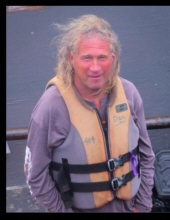 Dan William Heiner, 65, of Astoria, OR, passed away peacefully surrounded by family and friends on Sunday, August 30th, 2020.

Dan was born in Astoria, Oregon, on December 11, 1954, the son of Frank “Bill” Heiner and Josephine “Betty Jo” (Whitten) Heiner. He was a beloved son, brother, father, grandfather, great grandfather and friend. An avid outdoorsman, runner, hunter, clam digging extraordinaire, fisherman and Chinook Indian Nation Member. You could find him running in the woods or on a trail, canoeing in the river, clamming on the beach, working with Fish and Wildlife or telling stories at your dinner table (ice cream for dessert).

He is survived by his mother Betty Jo Heiner, His brothers, Don, Del and Dean all of Astoria, his children, Roxane Didion and her husband John of Montesano, Wa, Glendon Ely and wife Anna of Hammond, OR, Tabatha Quashnick of Burien, Wa, Tonya Smith and her husband Jesse of Astoria, OR, Danielle Cornish and husband DJ of Nehalem, OR, numerous grandchildren, great grandchildren, cousins and friends. He had three important women through his life, first wife Donna Quashnick, longtime friend Sheila Kane and ex-wife and friend Bonnie Stinnett. He is preceded in death by his father Bill Heiner and brother Dave Heiner.

Dan grew up in Astoria with his family and spent a lot of time outside. He graduated from Astoria High School in 1973. He enjoyed running, was on the Cross-Country and Track team in Middle School and High School. He got back into running in his early forties and never stopped. He has run in numerous marathons over the years collecting a mass number of ribbons and metals from all over the Pacific Northwest. He liked to run every day, mostly in the woods and on the logging roads or what some might call “a Heiner trail”, and he kept count of the miles he has been accumulating through the years. Averaging about fifty miles a week, but a run never counted if it was less than four miles. Through the last twenty plus years he had gotten to almost fifty thousand miles, a goal of his, landing just shy of that before his passing.

Dan had many jobs over the years, a fisherman and clam digger, working at the Plywood Mill in Astoria, owning and operating a bike rental company in Seaside, OR, then Hammond, OR, then finally in Long Beach, WA, he then went on to help with wildlife management as an employee of Oregon Department of Fish and Wildlife.

Dan had an incredible life, filled with adventures, collections and stories with friends and family. He loved being in the woods, even moving out to “camp” in 1992, living full time in the A-frame he built with his own two hands, family and friends affectionately called him “Mountain Man Dan” or “t’siyatkhu”.

A Celebration of Life is scheduled for August 29th, 2021 at The Clatsop County Fair Grounds at 2:00pm. In honor of Dan, come to share stories and enjoy an ice cream social.
To order memorial trees or send flowers to the family in memory of Dan William Heiner, please visit our flower store.