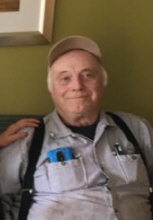 David was born October 13, 1939 in Virginia, Minnesota to Alfred and Lois Langlo, the family moved to Gearhart, Oregon when he was three years old. He attended Gearhart elementary school and Seaside high school. After high school he owned and operated three log trucks and worked various logging jobs in the woods. On January 13th 1967, he married the love of his life Darlene, they moved to Seaside where he would reside the remainder of his life. In 1973 he started his own masonry business "Dave Langlo Masonry," he operated his business until his retirement in 2006. He specialized in putting block foundations under existing homes throughout Clatsop County. One of his proudest accomplishments was the construction of the carousel mall in downtown Seaside. Another was the brick entry way around Ken and Sons market in Seaside that was completed for their 25th anniversary. One of his greatest passions in life was collecting antique vehicles, (he had 14 at the time of his passing) he loved to drive them in parades and show them in car shows. He was a member of the Lower Columbia Classic Car Club. He also loved to make his own folk art creations, which mainly consists of old car parts. His house is adorned with many of his creations. His living room contains a love seat, made from the rear end of an old Rambler American car. David is survived by his wife Darlene Langlo, son Toney Newton and wife Debbie, daughter Brenda Langlo and her partner Steve, daughter Nancy Smith and her husband Kevin. Granddaughters Shellie Langlo, Lacie Malvaney and Brittany Newton. He is also survived by his brothers John Langlo and wife Margaret, Jim Langlo and wife Sonja and numerous nieces and nephews. He will be remembered as a hardworking man who enjoyed his family and working in his shops at home on his many vehicles. He was extremely proud of the handicapped accessible block home he built for his wife Darlene. There will be a celebration of David's life this Saturday at 1:00pm at their home, all are welcome to attend. Hughes-Ransom Mortuary & Crematory in Seaside is in charge of arrangements. Thank you for visiting hughes-ransom.com and sharing memories and signing the guest book.