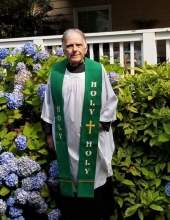 David served as parish pastor in Dresser/Sand Lake, WI; as a retirement home Chaplain/administrator with Good Samaritan Society from 1970-77; Held other administrative roles in Ottawa, IL, Thousand Oaks, CA, Denver, CO Salem/Keizer OR. He returned to parish ministry in 1989 at Zion Lutheran Church in Redmond, OR. In 1999 he accepted a call at Our Saviors Lutheran Church in Seaside, OR. He retired in 2004. After retirement he served as Interim Pastor in Chinook, WA.

A memorial service will be held Saturday, February 27th at 11am at Our Saviors Lutheran Church Seaside. Due to Covid restrictions, space is limited, family requests that you follow the service via live feed. A livestream link can be found at top of homepage oslc-seaside.org . Anyone who wishes to attend in person must reserve a seat by calling the church.

Memorials may be made to “Food for Kids Program” c/o OSLC 320 1st Ave Seaside OR 97138
To order memorial trees or send flowers to the family in memory of David Munro Barnet, please visit our flower store.