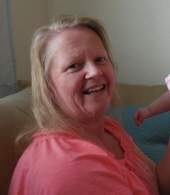 Debra Sue Miyar was born in Astoria, Oregon to William Charles & Vesta Jane (Brons) Eggleston on January 14, 1958. Debbi, as she called herself now, had a very independent spirit and would set her sights on something and with hard work and planning would achieve what she set out to do. At 16 she had her first job and then when she graduated from High School, she announced that she would be going on a trip to tour Europe. Such was Debbis life. One could say that it was this willful independent sense that defined her life and how she could set her mind to something and achieve it. She attended college while working and raising Charlie. Debbi went on to graduate from Linfield College with a Bachelors degree in International Business. Before retiring, Debbi worked at Costco for 20 years. Debbi had a strong belief in God and love for Jesus. While she was able, she attended Astoria Christian Church. Debbi departed this life surrounded by the family she loved on November 3, 2018 at 60 years of age. Debbi was preceded in death by her father William and nephew Scottie Earls. She is survived by her son Charles Eggleston (Sarah) of Joint Base Lewis-McChord, WA. her Mother Vesta Eggleston of Warrenton, her 3 sisters, Joni Osborn of Astoria, Vicki Earls of Warrenton, and Tami Gilliatt of Lynchburg, VA; her 2 granddaughters Ryann and Jordan Eggleston of Joint Base Lewis-McChord, WA. There are also 4 nephews, 3 nieces and a host of people whose life she touched who will miss her dearly. Debbis cremated remains will be interred in a private ceremony at the graveside of the family plot at Ocean View Cemetery in Warrenton. The public is invited to celebrate Debbis life at a memorial service that is scheduled at 2:00 PM on Saturday, November 10, 2018 at the Astoria Christian Church, 1151 Harrison Ave, Astoria, OR 97103. A reception will follow the service. In lieu of flowers the family has requested that memorial donations be made in Debbis name to either the Doernbecher Childrens Hospital or the Lower Columbia Hospice.