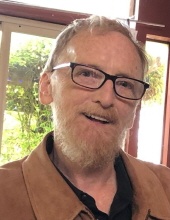 Derek “Derk” Alan Gascoigne was born Jan. 2nd, 1961, in Corvallis, Oregon to Jim and Peggy (Johnson) Gascoigne. Shortly after he was born, his family moved to Astoria, Oregon, where his younger brothers Ken and Paul were born. After spending his formative years in the Astoria school district, Derk graduated in June 1979 from Astoria High School.
After high school, Derk attended a meat cutter school in Cottage Grove, Oregon, then was employed as a meat cutter for Gene’s Meat Market in Mehama, Oregon.
Derk’s son, Alan, was born Oct. 1986. The birth of his son was one of the best days of Derk’s life.
Always looking for his next adventure, Derk was drawn to many careers throughout his life. He found his professional home and his work family as a tax preparer, bookkeeper and all-purpose accountant for William McClean LLC in Seaside, Oregon.
At long last, Derk fell in love with his soulmate, Colleen Gould, as well as her two sons, Nick and Mitchell. In April 2007, along with Alan, they all became a family when Derek and Colleen married. Derk treated all three of his sons as his own and made lasting impressions on both them and their friends by offering his support and his home whenever it was needed.
As a child, his parents taught Derk a solid work ethic which he demonstrated throughout his life. This ethic was also demonstrated in one of his favorite activities, swimming. He spent hours on Astoria’s Swim team preparing for many competitions.
Derk had a passion for the extreme. He loved being a daredevil with his younger brothers. Sometimes he made it through these challenges unscathed, and even more rarely, he confessed to his parents his epic adventures.
Derk loved the outdoors and spent as much time as he could camping and fishing. As a youngster, many family summer trips were made to the Wallowas, a favorite destination for both Derk and his father, Jim. When he met his wife Colleen, he truly found his equal in his love of nature.
Derk's other great love was his motorcycle. He continued to love it even after a major accident as a young adult that left him in a partial body cast.
To those who loved him, Derk can best be described as respectful and considerate with a kind and gentle soul. Whenever he faced a challenge, his positive attitude and strong work ethic would always see him through.
Derk is survived by so many who cared about him, including his wife, Colleen, son, Alan, stepsons Nick and Mitch Stephens, mother Peggy (Gascoigne) Snyder, Stepfather John Snyder, brother Ken Gascoigne and his wife Janique, brother Paul Gascoigne and wife Allison, brother and sister-in-law John Gould and Beate Wilson, half-sister Krista Toole and husband Ken, half-brother Jim Shepherd and wife Andrea, step-siblings Reuben and Leah Snyder.
Derk had aunts, uncles, nieces, nephews, cousins, and friends that will miss him dearly. He was like a second father to many of his sons’ friends that will continue to hold him in their hearts.
Derk passed suddenly and unexpectedly from a heart attack. He was preceded in death by his dad, Jim Gascoigne, and both sets of his grandparents.
In celebration of Derek’s life, an open house will be held from 1:00-4:00 Saturday, July 16, 2022 at the Warrenton Community, 170 SW 3rd St. Warrenton, OR 97146. Please bring stories to share.
To order memorial trees or send flowers to the family in memory of Derek Alan Gascoigne, please visit our flower store.