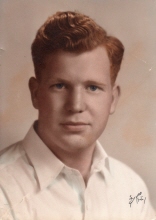 Don Verne Johnson of Astoria passed away peacefully at home on Friday April 24, 2015 at the age of 94. Don was born August 4, 1920 in Astoria, Oregon to Julius C. and Emma P. Johnson. Don was born and raised in Astoria, Oregon where he lived all of his life. He attended Lewis and Clark grade school and graduated from Astoria High School. Don also attended the University of Oregon through junior year. Don was employed at Astoria Marine Construction Company just prior to WWII. Don was in the United States Coast Guard and served for 3 years till the end of the war. After serving in the war Don joined his father in the auto dealership called Johnson Motor Company. He had to work his way up from floor sweeper, mechanic, service manager, salesman, sales manager, assistant manager, and after J.C. Johnson retired Don became the CEO and General Manager until the business sold in 1978 to Dave Lum and Tom Utti. Don then was employed by Lum and Utti as warranty Administrator until retiring in 1984. On August 30, 1940 Don married Betty Iseli in Astoria, she preceded him in death on January 27, 1988. On March 18, 1989 Don married Noma E. Kenwisher in Astoria, whom he spent his life with until his passing. Don was an avid member of the Peace Lutheran Church, the Astoria Elks Lodge, the American Legion, Astoria Optimist Club, past chairman of Lewis and Clark Boy Scouts. He was a volunteer in many programs including; tutor in the Host Reading Program at Astoria middle school, Hospice, Meals on Wheels and at the Astoria Food Bank. Don enjoyed woodworking, oil painting, fishing, traveling, going on cruises and family get together. Don is preceded in death by his parents; first wife Betty; son Ron; Daughter Janice Meeuwsen; and brother Clyde Johnson. He is survived by his wife Noma; grandson Rusty Johnson, great grandchildren Hunter & Tianna Johnson; granddaughter Kimberly & husband Mathew Garred; great grandchildren Kaley, Emily, Abigail and Noah Garred; adopted brother Gary and wife Angela Rassmusen; son-in-law Barney Meeuwsen and his children; grandson Steven & Janice Meeuwsen & their children, Rachel and Nicholas; grandson Edward & Valerie Meeuwsen & their children, Lane, Elden and Allison; granddaughter Donna Meeuwsen. A family service will be held at Ocean View Cemetery in Warrenton. Hughes-Ransom Mortuary is in charge of arrangements.
To order memorial trees or send flowers to the family in memory of Don Verne Johnson, please visit our flower store.