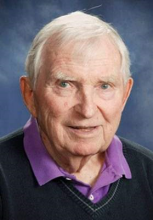 Donald Fisher died peacefully in his sleep in Seaside, Ore., on October 9, 2014. He was just shy of his 89th birthday. Don was born in Dickinson, N.D., on Nov. 14, 1925, to Williard and Magdalene Fisher. He had one brother Richard (Buddy) and two sisters, Patricia Maixner and Dorothy Mae Kostelecky. Don served in World War II in the Army Air Corps in Okinawa, Japan, in spite of his brother losing his life earlier in the war. After the war, Don went west with some war buddies. Don married Ruth in 1953. In 1954, Donna was born, and Richard joined the family in 1956. After graduating from the University of Oregon, Don worked for Weyerhaeuser Company in Aberdeen, Wash., until his retirement in 1983. Don retired early to care for Ruth during a long illness. Ruth died in 1993. Don married Laura Tompkins in 1994, and she passed away January 1998. Don moved to Seaside in 1991, where he worked part time in real estate. Don was a member of the Seaside Museum Kazoo Band, the Seaside Elks, and St. Vincent De Paul Society. Don devoted himself to Our Lady of Victory Catholic Church, where he served Mass daily for many years. Don enjoyed beachcombing, kite flying, working at the St. Vincent de Paul food pantry, playing golf and billiards with his buddies from the Elks, having coffee with friends after daily Mass, and visiting his children and grandchildren. Don is survived by his sister Dorothy Mae; his daughter Donna (Fisher Becker); his son Richard; his grandchildren Matthew Becker and Samuel Becker; his nieces Georgia Kostelecky and Mary Maixner Bice; and nephews Will Kostelecky, Tony Kostelecky, and John Maixner. A memorial service will be held Saturday, Oct. 18, 2014, at 11 a.m. at Our Lady of Victory Catholic Church in Seaside. In lieu of flowers, donations in Don's name may be sent to St. Vincent De Paul, P.O. Box 1189, Seaside, OR 97138. Hughes-Ransom Mortuary in Seaside is in charge of arrangements. Visit www.hughes-ransom.com to share memories and sign the guest book.

Funeral Home:
Hughes-Ransom Mortuary Seaside
220 N Holladay
Seaside, OR
US 97138
To order memorial trees or send flowers to the family in memory of Donald Fisher, please visit our flower store.