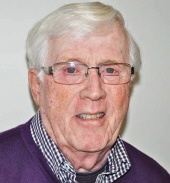 March 14, 1936 Dec. 11, 2016 Don Larson, a much-loved husband, father, grandfather and friend, passed away at home Sunday, Dec. 11, 2016. He will be greatly missed! Don was born in Portland to Elmer and Dena Larson on March 14, 1936, and has a younger brother Jim. He is survived by: Lois, his wife of 55 years; David Larson, Kristin Larson and Nicholas Clayton; Lorraine and Bill TenHaken and Kirsten and Josh Riedel, Rebecca and Brandon Winebrenner, and Erika and Alex Sneath; Duane and Elizabeth Larson and Rachel, Cameron and Paige. Don spent his career as a civilian employee for the Oregon National Guard and the U.S. Army Reserve. He retired as Sergeant Major, the highest rank for an enlisted person. Don served 13 years as a member of the David Douglas School Board, and upon arriving in Seaside he quickly became involved on various city commissions. In 2003 he became mayor and retired from that post in November. He loved his role as mayor, and served 14 years, the longest term anyone has served as mayor of the city. The Larsons attend North Coast Family Fellowship, and Don served as commander of AWANA for approximately 10 years. He loved hearing, "Hi Commander Don!" from a child as he walked down Broadway. Years serving these kids were some of his best memories. For many years the family camped at Fort Stevens, and it was during that time that he fell in love with Seaside. For the five years preceding his retirement he said, "I'm going to retire in four years and 11 months" (he would count down monthly) "and will move to Seaside and become mayor." Done! He also said, "Don't tell me I will love being a grandparent." His reluctance was instantly forgotten when he caught his first glimpse of Kirsten. His grandchildren were his greatest sense of joy his last 25 years! Don was recently honored by the City Council when they named the building housing the Seaside Public Library as the Donald E. Larson Building. He was especially touched by that recognition, and his family was thrilled he was given this honor while still alive. His years of service were further recognized this week when the flags of the city were flown at half-staff in his honor. Don's wishes were that all remembrances be given to YUGO Ministries (YUGO.org) toward providing a house for a deserving family in the Ensenada, Mexico, area. Thank you for visiting www.hughes-ransom.com to share memories and sign the guest book.

Funeral Home:
Hughes-Ransom Mortuary Seaside
220 N Holladay
Seaside, OR
US 97138
To order memorial trees or send flowers to the family in memory of Donald Larson, please visit our flower store.