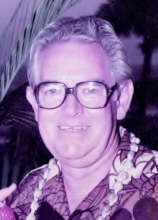 Donald Raymond Church was born January 5th. 1921 in Oakland , California. As a child, Donald and his family moved from Oakland to Seaside in 1935. He graduated from Seaside High School as President of his class in 1941. Don met his wife Betty while working for her father at their bowling alley on Broadway in Seaside. Don married Betty Jean Johnson June 6, 1942. After entering the U.S. Navy in 1942, Don attended boot camp in San Diego followed by "A" School in Memphis, TN. He served two years in the South Pacific during the war while Betty remained in San Francisco awaiting his return. Following World War II Don & Betty owned a photo studio in Oakland, CA. but returned to Seaside in the 1950's. Following their return to Seaside, Don was employed by the Daily Astorian and Ball Studio as a photographer until early 1960. Don then became Seaside Chamber Manager until assuming the office of Seaside City Auditor and Treasurer. In 1966 Don took a position as Administrative and Budget Officer for the Clatsop County Board of Commissioners. He was then elected to the position of Clatsop County Clerk in the 1970's. Don retired as chairman from the Clatsop County Commission in 1984. Don and Betty raised two children, Scott and Russell Church. Both boys sadly preceded them in death. Don's loving wife of 71 years passed away at age 93. Don, at 94 is now with her and their two sons. They are survived by two grand daughters, Tanya Eckroth of Tigard, Oregon and Megan Church of Daly City, California, Tanya's husband Grant Eckroth and great grand children Ethan and Nevaeh Eckroth of Tigard. Don was what most aspire to be and will be greatly missed by those who knew him. At Don's request, no service will be held.