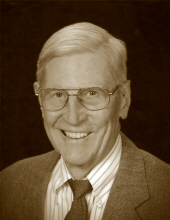 Donald Wesley Lindstedt, 88, of Cannon Beach, Oregon passed away peacefully in his home surrounded by family on Tuesday, October 21, 2014 He leaves his wife of 17 years, Deena Lindstedt; daughter, Lisa (Jeff) Beatty of Portland, OR; son, John Lindstedt of Seaside, OR; son, Joel (Courtney) Lindstedt of Bodega Bay, CA; brother, Robert (Carol) Lindstedt; sister-in-law, Doreen Lindstedt; step-sons, Mark (Marian) Pease, Randal (Annette) Pease, Bradley Pease; five grandchildren, nine step-grandchildren, five great-grandsons, four step great-grandchildren and many nieces, nephews, and dear friends. He was predeceased by his wife of 42 years, Marilyn Lindstedt, and two brothers, Warren and Norman Lindstedt. Don had a strong moral compass and an unwavering faith in God that guided his life and his relationships. He was a devoted husband, loyal brother and loving father. He had a joyful sense of humor which was especially evident to his many grandchildren who affectionately called him 'Da.' He remained an energetic, youthful person with an optimistic outlook on life. Don was born July 9, 1926 at Emanuel Hospital in Portland, OR to parents Gustav Joel Lindstedt and Edith Erickson Lindstedt. He grew up in the Overlook Park neighborhood and attended the Swedish Tabernacle Church. He attended Beach Grade School and graduated in 1944 from Jefferson High School. He enlisted in the US Navy in 1944 and served as radioman on the USS Tucson in the Pacific during World War II. He graduated from University of Oregon in 1950, where he was a member of Phi Gamma Delta fraternity. He went on to earn his Masters Degree from Stanford University. Don enjoyed a 43-year career in credit and finance with American Can Company, Louisiana Pacific and Georgia Pacific Corporation. He also taught Credit and Finance courses at the University of California San Francisco and Portland State University. Don was a lifelong athlete. He lettered in ice hockey in high school, and was a pitcher on several competitive fast-pitch softball teams in Portland and San Francisco. He took up running in his 50s, and went on to run four marathons. In his retirement years, he became an avid golfer and went on several bicycling tours in Europe with Deena. He was an active member of Cannon Beach Community Church where he was an Elder for many years. He volunteered with the Cannon Beach Food Pantry, and read with students at Cannon Beach and Seaside Grade Schools as part of the SMART program. He was a member of the American Legion, Seaside School Board, and served as President of the Cannon Beach History Center for two years. Memorial gifts may be made to the Cannon Beach Community Church or the Cannon Beach Food Pantry. A memorial service will be held at Cannon Beach Community Church on Saturday November 8th at 10:00 AM. 132 E Washington, Cannon Beach, Oregon (503) 436-1222 Hughes-Ransom Mortuary in Seaside is in charge of arrangements. Visit www.hughes-ransom.com to leave memories and sign the guest book.