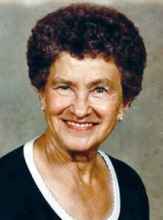 Doris Curran, age 96, graduated to heaven on Oct. 11, 2015, at her Seaside residence. Doris was born May 15, 1919, in New Sharon, Iowa, to Elmer and Sarah Reed, the third of their six children. After high school graduation, Doris moved to San Francisco to live with her older brother, Ernest Reed. While there she worked at the World's Fair as a concierge on Treasure Island. Later she moved to Southern California, and worked at Lockheed as a "Rosie the Riveter" during World War II. Her next move was to Pacifica to become a restaurant owner and captain of her own ship. After a few years, Doris left the Bay Area and headed to the Sierra Nevada, where she would own a gift/jewelry boutique in the Donner Lake Lodge Resort. Here is where she would meet her husband-to-be, William (Willie) Curran. Doris' favorite career years were spent as a supervising office clerk for the California Department of Forestry and, of course, as the wife of the supervisor of Truckee, Willie Curran. Doris and Willie would retire to Fallon, Nevada, and eventually buy a second home on the coast of Ocean Park, Washington. Doris loved the ocean and collecting sand dollars that she hand-painted for gifts. Doris and Willie would have 42 years of marriage before his passing in 2004, then Doris made her final home in Seaside, Oregon. She became infamous for her yearly climbing of the Astoria Column on her birthday, up to the age of 94. The Daily Astorian would write an article of her climb, and many would take her photo, with her permission. Upon her 95th birthday, Doris was recovering from a major hip surgery, so she sat at the Column's base and looked on as her great-nephews climbed in her honor. Doris is survived by her sister and only living sibling, Patricia Smith, and her husband, Merle, of Arizona; Willie's three daughters, Sherlynn, Wilana, and Shauna; as well as many nieces, nephews, and greats of both. Doris was beloved by all, and is greatly missed by family and friend

Funeral Home:
Hughes-Ransom Mortuary Seaside
220 N Holladay
Seaside, OR
US 97138
To order memorial trees or send flowers to the family in memory of Doris Curran, please visit our flower store.