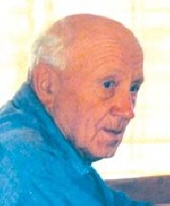 Eden J. Carlson, 98, of Seaside, died Thursday, Jan. 24, 2013, in Seaside.
He was born Feb. 26, 1914, in Pargas, Finland, to Andrew and Elin (Bloom) Carlson
He served in the U.S. Army in the Asiatic Pacific Theater.
He was a welder on Fred Divine Salvage Chief. He retired in 1979. He was a member of the American Legion and enjoyed fishing and clam digging.
He is survived by four daughters and two sons-in-law, Teresa and George Rouse of Ozark, Mo., Cynthia and Donald Philbrook of Seaside, Catherine Carlson of Astoria and Rochel Lupier of California; and two sons, Morris Nocita, and Gerald Carlson, both of California
In addition to his wife, a brother, Helge Carlson, and a sister, Inga Jacovitti, died earlier.
visitation will take place from 7 to 9 p.m. Tuesday, Jan. 29, 2013 at Hughes-Ransom Mortuary, 220 N. Holladay Drive in Seaside.
A graveside service will be held at 1 p.m. Wednesday, Jan. 30 at Ocean View Cemetery in Warrenton.
Memorial contributions may be made to the Seaside American Legion, 1315 Broadway, Seaside, OR 97138.
To order memorial trees or send flowers to the family in memory of Eden John Carlson, please visit our flower store.