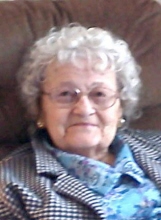 Edith, (Edie) Ruby Miller Kurns passed on to be with the LORD Jesus Christ January 17, 2014 in Seaside, Oregon. She was born August 2, 1928 in Bairoil, Wyoming, to Roy Earl and Edna Ruby (Guthnicht) Miller. At the age of four she moved to Brusett, Montana. From 1st to 8th grade she attended Blackfoot School House in Jordon, Montana. In 1947, she graduated from Jordan High School. Edith had 3 brothers, Roy, Harold, Eddie and 1 sister, Mary Louise that preceded her in death. On August 10, 1958, she married Andrew Kurns in Bellevue, Washington. She accepted Christ in 1960 and "lived for the Lord ever since." Edith volunteered at senior citizens events and different functions at the church including babysitting at the Christian Women's Club. Her hobbies included sewing, cooking, reading and raising flowers. Edith enjoyed collecting antiques and loved potlucks. It gave her great pleasure to cut stamps to help support missions. She is survived by her stepson and stepdaughter-in-law Gary and Linda Kurns of El Reno, Oklahoma; daughter and son-in-law Sherry and Kirby Peterson of Billings, Montana; son David Kurns of Astoria, Oregon; son and daughter-in-law John and Liz Kurns of Astoria, Oregon; son and daughter-in-law Tony and Kelli Kurns of Warrenton, Oregon; son George Kurns of Astoria, Oregon; 7 grandchildren; and 15 great-grandchildren. Memorial contributions can be made to Operation Christmas Child in her name. This is an organization that was dear to her and she enjoyed being involved in. Visitation will be February 1, 2014 from 10 a.m. to 2 p.m. at Creel Funeral Home in Lewiston, Montana. A funeral service will be held Saturday, February 1, 2014 at 2 p.m. at Christian and Missionary Alliance Church in Lewiston, Montana. Interment will be February 1, 2014 at Lewistown City Cemetery in Lewiston, Montana. Hughes-Ransom Mortuary in Seaside is in charge of arrangements. Please visit www.hughes-ransom.com to leave your condolences and sign the guest book.