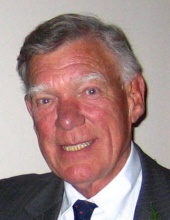 He was born December 15, 1930, in Billings, Montana, the son of Millard and Elizabeth (Verhelst) Cade. He grew up in rural, central Montana, and moved to Portland during the early part of World War II when Elizabeth found work as a welder in the shipyards. Afterwards they lived in Portland until Ed married and started a family. He graduated from Central Catholic High School in 1948 and from the University of Portland in 1952.

Ed married Bernice E. Meyer in 1950 in Portland, Oregon and together they built a life that grew to having 8 children and their families. In 1955 Ed started working for the Campbells Soup Company. He worked for Campbells as the District Manager of the Seattle Area until 1975 when he became a partner with the Kelley Clark Company, a retail food brokerage, in Seattle. He worked with Kelley Clark until his retirement in 1995. He enjoyed working in the food industry so much that after retiring, he worked at Safeway in Seaside, until 2008.

While living in Washington, Ed took up the game of golf and enjoyed every day he got to play. No matter what the weather was like, Ed just felt it was a great day for golf. He enjoyed his children and grandchildren immensely and almost could not have a better time than having a large family gathering. He loved to tell stories and to laugh. He enjoyed taking walks on the beach, playing cards (especially "slide gin"), and helping others whenever he could.

He spent much of his time volunteering at Our Lady of Victory. For many years he was in charge of the "Sunday Supper" program, which provides a meal to over 130 families. He acted as a server at mass on weekdays and sometimes on weekends. He also delivered meals to numerous people who could not provide for themselves. He also helped lead the drive to fund the 2011 Church renovation. If there was a job to do, more than likely Ed was willing to do it.

In lieu of flowers the family has asked that donations be made in Ed's memory to the organization that was so dear to his heart, The "Sunday Supper" program sponsored by Our Lady of Victory Catholic Church of Seaside. (See website link below in the Charity section of this page for direction of how to donate).

At the request of the family, funeral services are private.