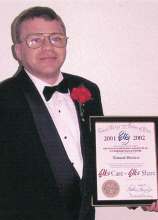 Edmund "Eddie" Whitlock passed away Wednesday, October 19, 2016 at the age of 48. He had fought diabetes for 46 years and kidney failure twice. He was always upbeat and never thought his health was a hindrance for any activity. He took pride in being the last First Grade class to attend Central Grade School in Seaside and the first Grade class to attend the new Seaside Heights Elementary School in one year. He wrestled and played football for Seaside High School and spent several seasons as a catcher on several youth baseball teams in Seaside. He held many jobs in Seaside and when asked which was his favorite he said "they all were". Eddie was a member of the young men's Order of DeMolay and was also a member of the Seaside Elks, serving as Exalted Ruler twice. He served on the Elk's State Visual Committee, was Elk of the Year in 2006 and received numerous commendations from his peers, both locally and statewide. He enjoyed photography, was exceptional at music trivia, had a passion for life, military history and guns, but history was his love. He cared very deeply for his friends. His favorite pastime was cooking, which many of us got to enjoy. He was an avid Huskies and Seahawks fan. Eddie was a lifelong resident of Seaside, where he was born on June 27, 1968. He was preceded in death by his brother, Marshall in 1972. He is survived by his mother, Patricia (Patsy) Kerwin and Hugh, father Eugene (Gene) Whitlock and Carole, sisters Sally and Cathy Drawson (Allan), brothers Sherman (Cindy), Richard (Kirsten and George (Angela), half-brother Joel (Karen), 4 nieces and 4 nephews, and numerous greart-nieces an nephews and so many others. He was privileged to have had a medical community that cared for him deeply and for whom he cared deeply as well. In lieu of flowers, donations should be directed to the Oregon Elks State Visual Committee or the Seaside High School Band.
To order memorial trees or send flowers to the family in memory of Edmund Whitlock, please visit our flower store.