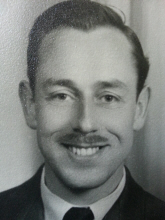 A skip in his step, a song in his heart, and a smile on his face describes Edward Joseph John Walsh, who passed away peacefully at home on May 23, 2014. At the moment of passing, a soft rain began to fall, a sign he was passing into the heavens. Ed was born in Dublin, Ireland, in December 1921 to Cecelia Roberts and Edward Joseph Walsh Sr. In 1948, he married his beloved, Josephine Teresa Cullen, and for over 66 years they forged a bond of love, and a life in a new country. Like so many Irish before, Ed left his homeland in 1953, boarded the SS United States and set sail to the land of promise. Ed established a home in New York, and sent for Josie and their two children who soon embarked on their own journey to join him. Educated by the Christian Brothers, Ed later attended trade school at Dublin Tech British Institute of Engineering Technology where he discovered a life long passion for finding creative solutions to complex engineering problems. Ed was an ardent proponent of conservation, renewable energy and recycling. His grandchildren can attest to this, as they often watched the video "Toxic Tallulah" with grandpa. Awarded the War Medal for campaign service during war time in WWII, Ed served in the armed forces of Great Britain, the Irish Defence Force, as signalman learned Morse code, and joined the British Royal Air Force Volunteer Reserve as Lead AirCraftsman. He worked on aircraft including the Vultee B T-13 Valient "Vultee Vulture" and "Spitfire" XIV. He was assigned to the 151st Fighter Operational Training Unit in Peshawar, India, guarding the Khyber Pass from Russian troop incursion into India. Born with a gift of mechanical genius, Ed worked for McDonnell Douglas Manufacturing-Aerospace Division, Westinghouse Industries, Hilton Hotels, The Ritz-Carlton, and operated his own appliance business. Family was Ed's main passion. Like his father, and his father before him, he was an avid equestrian. He was often seen on the strands of the shore, racing against the wind on his spirited Arabian, Fasaan. Ed is survived by his wife, Josephine Walsh (Cullen), daughters, Jeanne Walsh, Valerie Kelly, son, Noel Walsh, grandchildren, Shelly Saunders, Robert Stenger, Seana Fields, Alyson Fields, Megan Macomb, and Kevin Walsh. Greatgrandchildren; Lauren, Emily & Amanda Saunders , Hailey, Katie &Max Strimple-Fields, and Savannah Kelly; nephew Tony and wife Ann Thuillier, Joseph, Nikki, and Danielle Thuillier; daughter- in-law, Sara Walsh; son-in-laws, Tom Dumas , David Kelly, Jeremy Strimple, Tavish Macomb, and Kenneth Sims, the Buffam Family the crew at Norma's Seafood, and not to be forgotten, Eddie's best pal Billy Lutz. In lieu of flowers please consider a donation to Lifesavers at www.wildhorserescue.org,.
To order memorial trees or send flowers to the family in memory of Edward Joseph John Walsh, please visit our flower store.