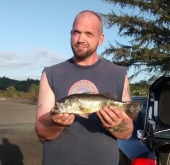 Edwin John Boyer 35, Died in Astoria Oregon, On Tuesday August 25, 2015 Edwin was born in Corvallis Oregon and raised in Astoria/seaside area to Deborah Boyer and Edwin Hepfner and was later adopted by Daniel Boyer. He was the younger of two children. Edwin met the love of his life Katy in 2013 and they were married June 3, 2014 in Tillamook, Oregon. In addition to his wife he is survived by his parents, his children Dallas, Kaitlynn, Emma, and Jakob, his Sister Paula Ramirez, numerous aunts, uncles, nieces, nephews, cousins, and best friend Chris Fitzpatrick. Edwin loved the outdoors; he loved fishing and hiking, working on cars and bikes. He loved spending time with family and friends and was always willing to help anyone in need. Edwin will be remembered by his loving, caring personality and his amazing sense of humor. A celebration of life will be held at a later date.
To order memorial trees or send flowers to the family in memory of Edwin "Ed" John Boyer, please visit our flower store.

Will be at a later date