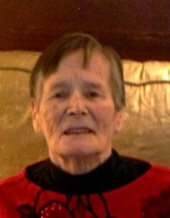 Eeva Kyllikki Ylipelto peacefully passed away May 23, 2016 surrounded by her loving family. Kyllikki was born October 31, 1925 in Toholampi, Finland. In 1947, she married Veikko Ylipelto and settled in Ahola, Finland, where their three children were born. In November, 1955, the family immigrated to the US and arrived by ship to New York harbor with $25.00 in their pocket and train tickets to Portland, Oregon. The family joined Kyllikki's two sisters and their families in Svensen where they had jobs at the Salo's mink ranch. With learning a new language and a different life style, life was challenging. The Finnish determination to succeed, "Sisu," became a way of life. In 1961, Kyllikki became a US citizen. They bought their first home and started a mink business from which she retired in 2004. Kyllikki became an active member in the Finnish Brotherhood, Ladies of the Kaleva, and Peace Lutheran Church, attending both English and Finnish services. Finnish Brotherhood provided a creative outlet. She wrote and directed plays, gave speeches at Finnish celebrations, and wrote articles for Finnish publications. She was also active in planning and promoting the Scandinavian Festival. Kyllikki's life was filled with family, friends, and lots of joy. Friends would pop in for a sauna, coffee, and to enjoy fresh homemade rye bread. Everyone she met was her friend. She is survived by her three children and spouses: Hanneli Turner (Bill), Heikki Pelto (Sherie), and Antti Ylipelto (Mary Ann), four grandchildren: Shelley, Nikki, Nick, and Justin, and four great grandchildren: Luke, Jack, Vincent, and Ava). The family wishes to extend heartfelt thanks to Lower Columbia Hospice and their volunteers for their incredible assistance during these last months. In lieu of flowers, the family requests donations be made to the Peace Lutheran Church. The memorial service with a reception following is to be held at the church Saturday, June 4, 2016, at 2:00 p.m.
To order memorial trees or send flowers to the family in memory of Eeva Kyllikki Ylipelto, please visit our flower store.