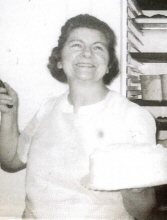 Eleanor Elsie Cory passed away March 31, 2014, at Nehalem Valley Care Center in Wheeler, Oregon. She was 99. Eleanor was born on June 26, 1914, to Lyman M. and Marien G. (Farley) Carary in Sacramento, California. She married Willard Cory in Sacramento, and the couple moved to Monterey area to work in bakeries. In 1963, they decided to come to Oregon. They stopped in Cannon Beach, Oregon. There they started the Cannon Beach Bakery, which became famous for the Haystack Bread, which was reported by Channel 8 news. Eleanor said it put Cannon Beach on the map. She was one of twelve children. Her hobbies were gardening, needle point and ceramics. She is survived by her daughters Pamela Leer of Cannon Beach, Oregon, and Patricia Pattee of Anchorage, Alaska. Eleanor has three grandchildren, five great-grandchildren and two great-great-grandchildren. Visitation will be Sunday, April 6, 2014, from 5-7 p.m. at Hughes-Ransom Mortuary in Seaside. A graveside service will be held Monday, April 7, 2014, at 1 p.m. at Ocean View Cemetery in Warrenton, Oregon.