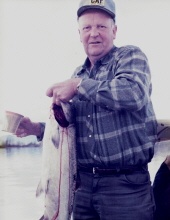 Elmer Leroy Johnson was born to an early Knappa settler family on March 19th, 1926. His father, Carl G. Johnson came to Knappa in 1889, as a child in a family of five who bought property on what is now Carl Johnson Lane.
Carl was a logger, was widowed and with a daughter Ida (Baldwin), in 1906. Carl, became a commercial fisherman, remarried in 1917 to a Norwegian immigrant, Johnetha (Ya- netta’) Larsdatter Vee in 1917. She was a widow with a daughter Borghilde (Christopher). She and Carl had four more children, Clara (Batenhorst), Agnes (Johnson), Clifford & Elmer.
Elmer and his siblings attended school above the Knappa Docks at the “Lower Knappa School” before attending Knappa High School. He participated in basketball and 4H. Unfortunately, at the age of 15, his mother passed unexpectedly. His father never remarried.
He often spoke that the family farm was a good place to grow up. Family was always nearby and he hunted, fished, provided firewood, built and repaired fences, cut hay, and milked the family cow. He also spent time at the floating community of gillnetters at Tongue Point, before the U.S. Navy prohibited the practice due to WW2. Occasionally he worked for other farmers in the area, sometimes earning an entire dollar a day. The country was still in depression and it was ingrained that waste was not tolerated. Everything was saved until the day it came in handy.
Upon graduating high school in 1944, Elmer joined the U.S. Navy to assist in the war. He served as a machinist’s mate and prepared for the invasion of Japan, then the surrender came. He was discharged in 1946.
Returning home, Elmer worked various jobs, delivering 5-gallon cans of milk to the creamery, working at Big Creek Hatchery, driving truck for Brookfield Cement, driving and delivering feed to farmers for Lower Columbia Dairy Association before taking a job at Wauna Paper Mill. He loved operating equipment and worked in the “yard” until his retirement in 1991.
On September 29th, 1951 Elmer married the love of his life, Shirley Salmi in the Brownsmead Lutheran Church. She was the daughter of ‘Siv’ and Roy Salmi, a well-known Brownsmead dairy farmer. Shirley and Elmer enjoyed a honeymoon travelling through the redwood forests and Yellowstone. For a few years they left the farm, moved to nearby Burnside and started a family, taking in Scott Ryon, a foster child, who remained in the family and adopting Dwayne, then Karlyn Johnson a few years later. In 1968 they rebuilt grandfather Johnson’s house and returned to the farm and continued to raise cattle, hay and garden. Oyster and crawfish feeds with trips to Moclips, Washington for razor clams were frequent. The boat and fishing pole were always ready for taking salmon or sturgeon.
Through these years, he and his brother Clifford also logged on the family farm. They fell and bucked trees and skidded them to self-loading log trucks. Elmer and Shirley always maintained a garden and an orchard.
Elmer was a lifetime member of the American Legion, Post 12 and the Astoria Elks, earning a 70-year pin.
After retirement they eventually moved to Astoria, travelled to Hawaii and Alaska and were regular visitors at Astoria Senior Center and the American Legion. Elmer continued to enjoy gardening and maintaining his lawn until his health intervened. He and Shirley moved to Astor Place. As his heart failed, he continually expressed his love for his wife and children. Death came peacefully in his sleep the morning of May 17, 2022.
He is proceeded in death by his parents and all siblings. He and Shirley are the last of “The Greatest Generation” in our family. His presence and strength will be missed. Elmer is survived by wife Shirley, sons Scott & Dwayne, daughter Karlyn, nephew Dale and niece Risa Johnson, eight grandchildren, 14 great grandchildren and 5 great-great-grandchildren.
A service will be held at 10:30 Friday, May 27, 2022 at Hughes Ransom Mortuary in Astoria, with a brunch to follow at the American Legion, Post 12 basement at noon. A private Interment for family only will be at 2:30 at Knappa Prairie Cemetery.

To order memorial trees or send flowers to the family in memory of Elmer Johnson, please visit our flower store.