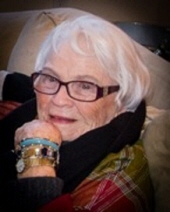 Elsie Frances "Peggy" Fife Sept. 1, 1923 Dec. 29, 2014 Elsie "Peggy" Fife, 91, a resident of Gearhart, Oregon died on Dec. 29th, 2014. Peggy, the daughter of George William Amsbary and Mary Josephine Shaw Amsbary and sister of William Shaw Amsbary, was born in Gallipolis, Ohio where we grew-up and graduated from Gallia Academy High School in Gallipolis. During WWII, Peggy moved to the Los Angeles area with her aunt, Gertrude Shaw Kent. Immediately after the war ended, Peg's soon-to-be husband, Thomas Elwood Fife, was released from a German prisoner of war camp and on July 11, 1945, the high school sweethearts were married. Deciding to stay in California Peg and Tom settled in Van Nuys where they had two children: a son, Thomas Evan in 1949, and a daughter, Susan Candace in 1951. Within a few years they relocated to Fresno, CA and lived in the Central Valley for many years. From 1976 to 1986, Peggy and Tom owned "Fife's Department Store" in Galt, CA. After the death of her beloved Tom in 1993, Peggy spent the next 10 years caring for her Aunt, Gertrude Kent, "Gogo", who was more than a relative she was her lifelong friend. After the passing of Gogo, Peggy move to Gearhart to share her home with her granddaughter, Kimberly Fife Ward and her two great-grandsons. Peggy was a member of Cannon Beach Community Church. She enjoyed reading and traveling. Most of all, she loved to paint. She spent the last 10 years creating timeless memories for her family members and friends. Peggy is survived by her brother; William (Gunda) Amsbary of Huntington Beach, CA, children; Thomas (Micki) Fife of Visalia, CA and Susan (Thom) Dickerson of Seaside, OR, grandchildren; Kimberly Ward; Christopher (Jen) Palmer and Marie (Jeff) Loyd, great-grandchildren; David Ward, Nathanael Ward, Jack Gilbertson, Leah Gilbertson, Austin Palmer, Ryan Palmer and Hope Loyd and nieces and nephews; William (Whitney) Amsbary, Mary Kay Amsbary, William "Trey" Amsbary and Kady Amsbary. In Peggy's honor, services will be held at Cannon Beach Community Church on Saturday January 17, 2015 at 3:00pm. In the spring, internment will be in Galt, CA where she will reside forever with the love of her life, her late husband, Tom Fife. Remembrances may be made to the Alzheimer's Association or a charity of the donor's choice. Hughes-Ransom Mortuary in Seaside is in charge of arrangements. Visit www.hughes-ransom.com to share memories and sign the guest book.
To order memorial trees or send flowers to the family in memory of Elsie Frances Fife, please visit our flower store.