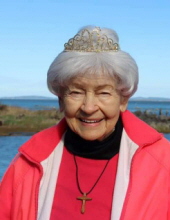 Eva Elvera "Vera" Capps 90, of Astoria died in Astoria on 11/16/20. Eva was born to Neil Alexander and Eva Stina (Niemi) Jarvi in Seattle, Washington on October 15, 1930. On April 12, 1948 she married Lowell Robert Capps. They raised 4 children as Bob was transferred around the Northwest from Seattle to Aberdeen, Tacoma, Portland, Pendleton and Walla Walla, Washington working for Union Pacific Railroad. They retired to Seaside, Oregon in 1983. They attended Our Saviors Lutheran Church. Vera taught Sunday School and served on the church council. She participated in Gideon's International and Child Evangelism Fellowship.

She enjoyed her family and many friends. She and Bob celebrated their 54th wedding anniversary shortly before his death in 2002.

Vera is survived by her sons David Michael (Kim) Capps of Boise, Idaho and Douglas Alan (Gwynn) Capps of Tigard, Oregon. Her daughters Kathleen Marie (Cedric) Shanks of LaGrande, Oregon and Susan Elaine Haines of Astoria, Oregon, as well as her grand children:

A private grave side service was held. A memorial service will be held at a later time.
To order memorial trees or send flowers to the family in memory of Eva Elvera Capps, please visit our flower store.