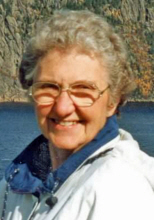 Eva Lucile Moore, of Astoria, passed away Nov. 7, 2015, at the age of 89. Eva was born Sept. 5, 1926, in Geneva, Nebraska, to Clare and Leona (Weber) Yates. The family moved from Nebraska in 1934 to Albany, Oregon, where she later met Kenneth Moore. They were married in 1947. The couple moved to Astoria in 1965. Eva was a volunteer at Columbia Memorial Hospital. Eva enjoyed square dancing and was active at the state and local levels. Eva also enjoyed traveling and spending time with her grandchildren. She is survived by daughter, Sandra Kroczynski of Hammond, Oregon; two sons, Stephen (Sheryl) Moore of Astoria, Oregon, and Richard (Cynthia) Moore of Seaview, Washington; seven grandchildren; and eight great-grandchildren. Eva is preceded in death by her husband, Kenneth, and son-in-law, Leonard Kroczynski. Memorial contributions can be made to Columbia River Maritime Museum. A visitation will be held on Saturday, Nov. 14, 2015, at 11 a.m. to 12:30 p.m., with a funeral service to follow at 1 p.m. Hughes-Ransom Mortuary in Astoria. Private interment will be a Greenwood Cemetery in Astoria at a later date.
To order memorial trees or send flowers to the family in memory of Eva Moore, please visit our flower store.