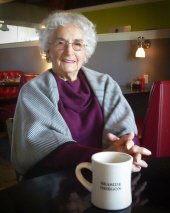 Evelyn Claire (Ruthrauff) Lovell passed away peacefully at her home in Seaside, Oregon, on March 15, 2017, in the company of family and friends. She was 96. Known for her quick wit and vivacity, Claire's roots in the community ran deep. Except for brief stints in Grays Harbor and Portland, and five years in Astoria, Seaside was her only home. In her own words, "Some flowers just want to be left alone to bloom where they are planted I'm one of those, myself." Claire was born in Seaside on Sept. 9, 1920, to Charles and Myrtle (Sawrey) Ruthrauff. The youngest of nine children, she attended Central School and Seaside Union High School, graduating as salutatorian with the Class of 1937, an honor she shared with close friend Evelyn (Stewart) Redkey. After training at St. Mary's Hospital School of Nursing, she became a registered nurse in 1943, later returning to work in the hospital's maternity ward. Her nursing career spanned more than four decades, during which time she also married and raised a family. She worked for many years at the Seaside Clinic and at Ocean Air (later Ocean Park) Nursing Home, where she served as head nurse and administrator until her retirement in 1985. Not content to be idle, Claire found a new pursuit as a columnist for the Seaside Signal. "Scene and Heard" appeared regularly from 1990 to 2017, with her final submission completed a week before her death. In her column, Claire mused about everything from local history and current goings on, to language and life lessons. It reflected her wry sense of humor, and most often closed with a favorite quip or laugh line. In 2009, she published "Where the Heart Is," a memoir and celebration of the hometown she treasured. Many of Claire's activities and friendships revolved around Seaside United Methodist Church, where she was active from a young age. She especially enjoyed singing with the choir. The church honored her 75 years of membership in 2010. She was also a 70-year member of the American Legion Auxiliary Post 99. Throughout her life, Claire corresponded with countless friends and acquaintances, and wrote letters of admiration and admonition to public figures. Those who knew her will recall her remarkable memory for birthdays and special occasions, which she always acknowledged with a personal note. Claire had a deep appreciation for both language and music; she composed poetry, lyrics, and loved to dance. As befits a lifelong resident of the coast, she was for many years an accomplished clam digger. She delighted in watching birds and wildlife and taking walks about town, catching up with friends and neighbors along the way. Claire is survived by her children, Robin (Hill) Derringer (Stan Delgado) of Bremerton, Washington, Gary Hill (Connie Oksol) of Oakland, California, Jeffrey Hill (Nancy) and Lauren (Lovell) McMichaels (Rob), both of Eugene, Oregon; grandchildren, Aimee, Andra, Julia, David and Elena; and great-granddaughter, Emery. She was preceded in death by longtime friend and sweetheart, John Raniero. A memorial celebration will be held at 11 a.m. on Saturday, May 6, at Seaside United Methodist Church, with a reception to follow. All are welcome. Private burial will be at Ocean View Cemetery in Warrenton. Thank you for visiting Hughes-Ransom Mortuary & Crematory at hughes-ransom.com to share your memories and sign the guest book.