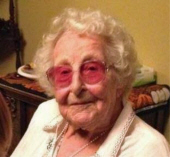 Florence was born October 19, 1911 to Martin and Laura Krug in Valley City North Dakota. Florence passed away October 25, 2015 having just celebrated her 104th birthday. Her early years were spent growing up and working on the family farm with her four siblings, brothers Martin and Lewis and sisters, Pearl and May. These difficult years, coupled with the great depression, formed her lifelong traits of hard work, stubborn self-reliance and frugality. More importantly it stressed appreciation of family as well as the little things in life. Florence graduated from Valley City High School. In the early 30's she travelled with her sister to Oregon where she met and married Harold Ystad in Astoria April 8, 1944. During the war hears Florence worked in the defense industry running a drill press and lathe making airplane parts in Portland, a true "Rosie the Riveter". After the war Harold and Florence returned to Astoria where she worked in retail sales for Montgomery Wards and Fisher Brothers. Her working years were cut short by the birth of her only child, Jay Alan in 1954. Shortly after his birth they moved to Port Orford where Harold was a commercial fisherman. Due to Harold's ill health the family moved back to Astoria. The traits that were developed in her formative years became a great asset to help hold the family together. At this time she worked for several employers and finally retired from Clatsop County District Court in 1979. After Harold died in 1971 she devoted herself to getting her son educated and established. Accomplishing this, she married Ted Jacobson in 1979. They enjoyed many years of retirement fishing, clamming and spending winters in Arizona until Ted's death in 1999. Florence moved to Clatsop Retirement Village in 2004. She developed many friends among the residents and staff. She cherished her special friendship with Robert "Doc" Niekes. In her last years she enjoyed the visits of her grandson, Chris Ystad and wife Lisa and great grandson Tanner. At the time of her passing, she was anticipating the birth of her second great grandson in December. Florence is survived by her son and daughter in law Jay and Eileen Ystad of Astoria, her grandson Chris and his wife Lisa and great grandson Tanner of Sitka Alaska and nephews, nieces and cousins. Florence's memorial service is Saturday, October 31 at 1:00 pm at First Lutheran Church.
To order memorial trees or send flowers to the family in memory of Florence Emily Jacobson, please visit our flower store.