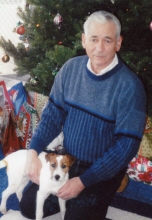 Frank Azevedo was born in Hanford, California on June 3, 1939 to John & Vera (Cardoza) Azevedo. He married Beverly Ivarie on April 1, 1970. Frank faithfully served his country during the Vietnam War in the United States Coast Guard for 20 years and he also served for 4 years in the United States Air Force. His military service time included deployment aboard the US Coast Guard Cutter (USCGC) 'Yocona' and USCGC 'Westwind', a Wind-class ice breaker. After his career in the service, Frank went on to become a maintenance supervisor with the Warrenton School District for 20 years. Frank was passionate about cultivating his garden, spending hours tending to his dazzling Clematis flowers which were his pride and joy. He also enjoyed watching sports, his favorite being baseball. As well as spending time with family, Frank loved his Jack Russell Terrier, 'Jeter'. Frank is survived by his wife Beverly Azevedo, 5 children; Mark, Kari, Marissa, Michael, and Jody; 11 grandchildren and 5 great-grandchildren. No funeral services are planned at this time.