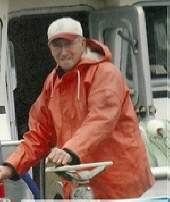 Frankliin Dominic Tarabochia of Astoria lost his hard fought battle with mesothelioma on Saturday, March 9, 2013, in Seaside. He was 76.
Mr. Tarabochia was born in Astoria on January 12, 1937, to Joseph and Winnifred Tarabochia. His parents proceeded him in death as well as his brother John Tarabochia, and his sister Katherine Sagen.
After attending school in Brookfield, WA, and Astoria, Frank went on to become commercial fisherman. He spent much of his time gillnetting on the Columbia River and most of his summers in Alaska fishing Bristol Bay.
On May 31, 1960, he married Eileen Askeland in Astoria, she survives.
Along with his wife, Frank is survived by: his daughter and son in law Stephanie and Chester Bushnell of Warrenton;daughter and son in law Kimberly and Barry Minkoff of Svenson, 3 grandchildren: Nicolas North of Warrenton, Megan North of Svenson, and Eric Jenson of Hillsboro OR. His brothers; Joe Tarabochia of Astoria, Mike Tarabochia of Gladstone OR; his sisters Judy Palmer of Eugene and Joan Hemeon of Oregon City; numerous nephews, nieces, cousins and many many friends. Frank was loved by many and will be sorely missed.
A public viewing will be held on Wednesday March 13, 2013, between 12pm-5pm at Hughes-Ransom Mortuary in Astoria.
Funeral service will be held at 1pm Thursday, March 14, 2013 at St. Mary's Star of the Sea Church in Astoria.
To order memorial trees or send flowers to the family in memory of Franklin Dominic Tarabochia, please visit our flower store.