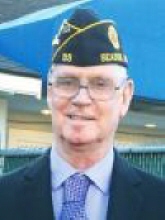 Gary Lee Heller was born May 26, 1944, in Centralia, WA, to Ethel Agnes Heller and Marion Everoll Heller. Gary passed away on July 3, 2014, in his home in Seaside, Oregon. Gary went to school in Cannon Beach and Seaside. After high school he went to work for Weyerhaeuser in Centralia, WA, as a fork lift operator. At the age of 22 Gary moved to Los Angeles, where he worked for California Water and Power as a meter reader. He settled there and bought a home. Over time he worked his way up to a supervisory position as a fraud investigator. He was very proud of the fact that he was instrumental in recovering thousand of millions of dollars in unpaid bills. In the early 60s Gary joined the National Guard. He served as a combat engineer for 8 years. Unable to resist the pull of his hometown roots, Gary retired at the age of 55 and purchased the home, that he loved and lived in until his passing, on S. Edgewood in Seaside, OR. Gary was known to many people as having the biggest heart, compassion and concern for those around him who were struggling or having difficulty in life. He would, in every way, try his best to make their life better. Gary never married. He is predeceased by his parents and a half sister Ethel McBurney. Gary is survived by his oldest sister Jeanette Klefstad of Philomath, OR, his sister Mary Williams of Topeka, KA, his brother Duane Heller and Duane's partner Meredith Owen of Seaside, OR, as well as multiple nieces and nephews. Gary was a member of the American Legion, Seaside Post 99 for twelve years. He found great pleasure in participating in the programs of the American Legion and was very generous with his time and involvement with the Post. Gary also enjoyed puttering around his house and tending his flowers. Of all Gary's pleasures the thing he enjoyed most was helping those around him. A celebration of life will be held at 4 p.m., Friday, July 11th, at the Seaside American Legion, 1315 Broadway, Seaside, Oregon. Any donations or remembrances should be directed to the American Legion, Seaside Post 99 Scholarship Fund or Seaside High School Scholarship Fund.
To order memorial trees or send flowers to the family in memory of Gary Lee Heller, please visit our flower store.