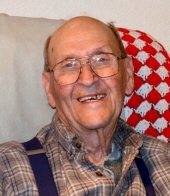 Surrounded by family, Gene Morris passed away peacefully at home in Randle, Washington on May 27th, 2014. He fought a short battle with lung cancer, supported by his loving wife Barbara & family. He will be greatly missed by all who knew him. Gene Morris was born to Herb and Melvina Rose Morris on Sept. 8, 1928 near Randle, WA, in his parent's home at Tower Rock. He was the second of four children. The family moved from Tower Rock to Kosmos and then to Morton. Gene helped take care of his sick mother. When he was 16 she passed away. He attended school in Glenoma and Morton. Gene's first job came when he was a small boy as a pin setter at the bowling alley in Morton. He then moved on to a newspaper route, delivering to all of Morton on his bicycle. At a very young age he was proud to have owned his own logging truck. He also worked with his Dad logging. In December of 1946 he joined the Army and served as a Surgical Technician at Madigan Hospital in Tacoma. He was honorably discharged in 1948. He was very proud of his military service. He enjoyed staying with His Uncle Bill and Aunt Martha Morris in Naches, WA for a couple of years where he was employed wiring houses. On a special day, the first of August 1950, he married his sweetheart Barbara Jean Henderson. They moved to White Salmon, WA where son Dane was born at Hood River, OR in 1951. Followed by son Kevin, born in White Salmon in 1952. Gene built their first home in Glenoma. Oldest daughter Wendy was born in Morton in 1954. They rounded out their family when youngest daughter Shelli was born at Morton Hospital in 1960. They moved to their place between Savio Road and Hwy 12 in 1956. In 1959 they built the store, Gene and Barb's Gas and Grocery. Gene also drove truck for C & E lumber for five years. He and brother Wink had a fuel business in later years. Gene built their new house in 1966. Gene and Barb ran the store and also turned their house into Barb's Dinner House in 1981. Gene ran the store for over 40 years until he retired in 2000. Gene was a compassionate and generous man. His smile lit up the community. His generosity touched many families in Glenoma and surrounding areas. If you had kids in the family, they would never go hungry if he had any thing to do with it. Some of the fond memories include people paying their bill and receiving a quart of ice cream as a thank you. If you were a little kid, you got to go around the counter and pick out some penny candy. Gene was a hard worker and many people attribute their work ethic to him. He was a fair and caring employer. He loved to work with his Cat using it for logging. He enjoyed raising cattle. He loved nurturing palm trees. He liked to drive in the mountains, and often traveled by car. His favorite part of traveling was getting to swim. The family took many vacations and would often include an extra kid. The Morris house was always filled with extra kids. Even as Gene aged, he and Barb were always helping care for grandkids, great-grandkids and everybody else's kids. Gene loved searching for relatives back east and for twenty years they took an annual trek to find more family. Gene was preceded in death by his parents Herb and Melvina Rose Morris and grandchild, Aaron Huff. He is survived by his wife Barbara of 64 years, brother Wink (Joanne) Morris of Randle , sisters, Lois Mahanes of Olympia and Beverly Perkins (Don) of Centralia. Sons, Dane Morris and Kevin Morris, both of Randle. Daughters Wendy Brady (Larry), of Randle and Shelli (Rick) Auman of Onalaska. Grandchildren, Venecca (Ray) Pennington, Jesse Morris, Shelby (Keith) Bronstrup, Jonny (Jolena) Mathis, Jenny & Jeanee Morris. Great-grandchildren, Ashlee, Steven & Jazmine and great-great-grandchildren, Kenzie and Adlee. And many extended family. Gene is leaving behind a legacy of love and a lifetime of memories, he is gone but not forgotten. Please join us to celebrate the life of Gene Morris at 11:00 AM on Saturday, June 21, 2014 at White Pass High School in Randle, WA. Donations may be made in Gene's memory to: American Diabetes Association or American Cancer Society. Please visit Hughes-Ransom.com to leave your condolences and sign the guest book.
To order memorial trees or send flowers to the family in memory of Gene Morris, please visit our flower store.